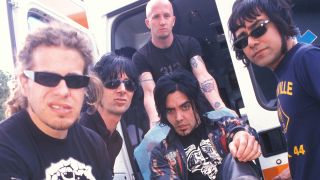 Each year the music industry throws up a fresh batch of bands with ‘Next Big Thing’ tags attached. Some fly, others crash and burn with dreams and potential unfulfilled, some make great comebacks – and there are one or two who split up should have remained so.

Twenty years on from the start of the millennium we look back at some of the bands who were tipped for greatness and take a look at what happened to the victors, runners-up and those who never quite got out of the blocks.

Then: Fronted by psychotic Furby Casey Chaos, and produced by Slipknot/Korn desk-jockey Ross Robinson, incendiary punk-metal LA quintet Amen arrived fully-formed with the release of their self-titled Roadrunner Records debut in September 1999: a move to Virgin Records for its intense follow-up We Have Come For Your Parents was supposed to push the band into metal’s premier league.

Now: Despite rave reviews and thrillingly combustible live shows, Amen never truly ‘happened’. Blame ‘The Man’, if you like. A new Robinson-produced album (recorded with Dave Lombardo on drums) is still awaiting a release date five years after it was reportedly finished. The only news from the Amen camp recently was Casey Chaos' arrest for an alleged assault at his home in June 2019.

Then: Following two excellent underground releases (1996’s Acrobatic Tenement and 1998’s In/Casino/Out) At The Drive-In were propelled into the spotlight by their stunning third album, 2000’s Relationship Of Command (produced, again, by producer-du-jour Ross Robinson), released on the Beastie Boys’ super-hip Grand Royal imprint. On the back of some jaw-dropping live shows and a memorable appearance on Later…, the frothing UK music press instantly proclaimed the El Paso hardcore crew to be ‘The New Nirvana’. Within a year, they imploded.

Now: Spawning a plethora of diverse bands from the post-hardcore of Sparta to prog voyagers The Mars Volta, At The Drive-In seemed destined to remain in the history books. It was therefore a massive surprise when they actually reformed for shows in 2012, and again in 2016. Incredibly, an album also emerged in 2017. The problem was that in•ter a•li•a was a pale imitation, if we're being kind, and a total waste of time if we're being truthful. They're also pretty crap live now too, which is a shame. Be careful what you wish for.

Then: A Cork-based Irish/French/Italian quintet taking musical cues from Jane’s Addiction, Tool, Led Zeppelin and Soundgarden, Cyclefly became a ‘buzz’ band with the release of their Generation Sap debut in the summer of 1999. Fronted by the delightfully unhinged Declan O’Shea – an Iggy Pop/Perry Farrell hybrid prone to wearing red PVC suits – the band forged a close friendship with LA newbies Linkin Park, and were tipped for a big-time breakthrough with 2002’s Crave, which featured a guest appearance from Chester Bennington.

Now: Things kinda went south for Cyclefly from the moment Wildhearts bassist Danny McCormack pissed on Declan O’Shea’s PVC trousers at a London venue in 2002. After a break from the music business, the singer reunited with his guitarist brother Ciaran, and fellow Cyclefly man Christian Montagne to form MAKO DC in 2007. That band’s debut album, Living On Air, was released in 2011 while its follow-up Timeless eventually arrived in March 2019.

Then: Tough nuts from Corby, Raging Speedhorn initially attracted press attention as much for their ‘tasty’ reputation as for their brutal, snub-nosed metallic roar. They were bracketed alongside peers Hundred Reasons, Lostprophets and earthtone9 as a new breed of British acts capable of taking on the world.

Now: Though the ‘horn toured relentlessly, released five fine albums and scored a minor chart success with 2001 single The Gush, they were never sufficiently house-trained to garner more than cult status. Following a six-year break, the band unexpectedly returned in 2014, and a new album, Lost Ritual, appeared in 2016. They're still a force live despite having (thankfully) calmed down a bit, though they're now without vocalist John Loughlin who stepped aside earlier this year.

Queens Of The Stone Age

Then: Ex-Kyuss men Josh Homme and Nick Oliveri had metalheads onside from the get-go, but with the release of their second album Rated R, and its killer first singles The Lost Art Of Keeping A Secret and Feel Good Hit Of The Summer (featuring one R. Halford), the LA rockers became The One Rock Band It’s Cool To Like among mainstream music fans. The Ginger Elvis then basically proceeded to seduce the entire planet by being an utter bad-ass.

Now: Though bass berserker Oliveri has long since departed, Queens have retained their last gang in town outlaw swagger even as they’ve swapped club-land for arenas and festival headline slots. Last album, the boogie-heavy Villains (2017), further cemented their status as one of the biggest bands in rock, with producer Mark Ronson adding another layer of ‘cool’.

Then: Glassjaw’s 2000 debut album Everything You Ever Wanted To Know About Silence (produced by that man Ross Robinson again, on a mission to “destroy” the nu-metal scene he’d helped birth) was a post-hardcore masterpiece: 2002’s Worship And Tribute was ever better. Health issues affecting singer Daryl Palumbo (who has Crohn’s Disease) meant that the Long Island quartet could never quite gain sufficient momentum however.

Now: Despite the fact Daryl and guitarist Justin Beck were never far away from the stage for too long fans had to wait 15 years for a follow-up to Worship And Tribute. 2017 finally saw the emergence of the well-received Material Control, which compared to other comebacks on this list was a veritable masterpiece.

Then: An alt. rock ‘supergroup’ of sorts, assembled by Smashing Pumpkins’ guitar tech Billy Howerdel, A Perfect Circle’s pedigree (Tool/Failure/The Vandals) gave them an obvious head start on other fledgling acts. Mer De Noms was a compelling debut, but with Maynard James Keenan never likely to leave Tool there were always doubts as to just how committed APC could be.

Now: After sporadic live appearances throughout the decade APC beat the comeback of Tool by a year when they released the beautiful piano-led Eat The Elephant in 2018. Though Maynard is back on Tool duty following Metal Hammer's Album of 2019, Fear Inoculum, and teasing new Puscifer material, who knows whether we'll have to wait 15 and 13 years respectively for new APC and Tool efforts.

Then: Formed from the ashes of quirky indie noiseniks Daisy Chainsaw, and fronted by the bewitching, enigmatic and… let’s say ‘kooky’… Katie Jane Garside, London alt. rockers Queenadreena were an intriguing bunch, splicing art-rock, gothic rock, post-punk and alt. metal into a dark sonic melange which frankly was always going to be a hard sell.

Now: Queenadreena, you may not be surprised to learn, never became household names, though Pretty Like Drugs, their single from 2002’s fine Drink Me album, remains a tune. Guitarist Crispin was briefly found on the London gig circuit with The Dogbones until 2015, while the last album that emerged from Ms Garside’s Ruby Throat project was 2017's Baby Darling Taporo.

Then: There was time when David Draiman’s simian ‘Ooooh wahahaha!’ shriek seemed inescapable, as the Chicago quartet transcended their nu-metal origins to become one of the most successful US metal bands of the past twenty years, with no fewer than four US number one albums. When The Sickness was released in 2000 David ‘Mad Davey’ Draiman inspired much sniggering, not least for the cheesy electric chair stage prop his band used onstage, but the big man surely had the last laugh.

Now: After a temporary ‘hiatus’, the Chicago band are still riding high following the huge success of their cover of Simon and Garfunkel’s The Sound Of Silence. Strangely 2018's Evolution was their first album since The Sickness not to hit the top of the US Billboard charts – a backlash to Draiman finally taking out those wonderful chin piercings, possibly – but they're still undeniably massive.

Then: Much like Disturbed, Illinois quartet Mudvayne didn’t get the easiest ride in the snarky UK metal press, largely because of their undeniably foolish pseudonyms and a er, ‘bold’ and colourful face-painted image, but their 2000 album L.D. 50, which occupied a niche somewhere between early mentors Slipknot and Tool, struck a chord with fans. Intelligent, inventive and idiosyncratic, their cult appeal broadened with 2002’s more sophisticated The End Of All Things To Come.

Now: Yep, you’ve guessed it, ‘on hiatus’ (since 2010) and a reunion seemingly unlikely. Frontman Kud – sorry, Chad Gray – now fronts Hellyeah, who also featured guitarist Gurrg – sorry, Greg Tribbett (aka ‘The Humbug’) – until 2014. There was a reunion of sorts when Greg and drummer sPaG – Matthew McDonough – formed Audiotopsy, which like their former band was a lot better than the name suggested.

Then: Taken under the wing of Fear Factory's Dino Cazares, this LA quartet seemed to be everywhere at the start of the 00s. Touring relentlessly and acquiring plenty of TV time thanks to the videos for Synthetic and New Disease, Spineshank's blend of industrial crunch and nu metal sheen seemed a winning combo. But even though their Roadrunner breakthrough effort The Height of Callousness had its moments they were a bit too late to the nu metal party to get much of a foothold. Its follow-up Self-Destructive Pattern even resulted in a Grammy nomination for Smothered, but frontman Jonny Santos jumped ship not long afterwards.

Now: Santos was back in the fold by 2008 with comeback Anger Denial Acceptance finally appearing in 2012. However, it barely registered on the metal map, with no sign of the band since their final show in July of that year.

Then: The British answer to the American rap metal tidal wave, One Minute Silence's politically-charged vitriol had far more in common with Rage Against The Machine than nu metal's self-loathing/party nature. Three albums all had their moments, not least 2000's Buy Now… Saved Later, while their live shows quickly became a thing of legend. However, their biggest achievement came as holding their own as direct support to Slipknot on their 2002 UK tour, before disbanding just four months after the release of 2003's Revolution.

Now: The fact the Irish/Anglo/Gibraltar metallers clearly didn't hate each other meant a reunion in 2011 wasn't that much of a surprise. 2013's Fragmented Armageddon EP offered up a nice blast of nostalgia, but the silence has lasted for a lot longer than a minute since. Frontman Barry still posts political messages on the band's Facebook page and guitarist Massimo Fiocco released an EP in 2016 under the moniker M.U.T.O.

Then: Coming in at No 4 behind Queens Of The Stone Age, Amen and Monster Magnet on Metal Hammer's Albums of the Year 2000 was The Workhorse Movement's sole release Sons Of The Pioneers. Popping up at the height of the nu metal craze, Detroit's best kept secret announced their arrival by mixing metal with Motown, funk, jazz and the blue-collar garage rock of the Motor City. But by the end of the year the band's brief ascent was cut short as they called it quits.

Now: From the band's ashes vocalist Myron, guitarist Jeff Piper and bassist Pete Bever formed classic rock band Dirty Americans who had some decent tunes in the mid 00s. But nothing has been mentioned of their original band since their break up. And rather than a disappointing reunion it might be for the best.