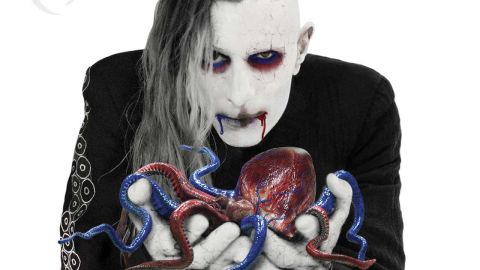 Formed by Tool frontman Maynard James Keenan and guitarist Billy Howerdel at the turn of the millennium, A Perfect Circle released three albums of expansive alt-metal. While they never quite reached the monumental heights of Maynard’s ‘other’ band, they drew a strong following thanks to pointed lyrics swathed in warm melodies borrowed from 90s rock. 2000’s Mer De Noms revelled in relationships, 2003’s Thirteenth Step riffed on the theme of addiction, and 2004’s eMOTIVe stood slightly apart as a collection of anti-war covers updated for the modern world. It was released to coincide with that year’s US election, where George W. Bush won his second term amid his self-described ‘War On Terror’.

Fast-forward 14 years, and Eat The Elephant is a new set of original songs about humanity, reflecting the current age. In some senses, society has slid further towards destruction. Dramatic march The Doomed appears to ask why we overlook the virtuous (‘What of the righteous, what of the charitable, what of the truthful, the dutiful, the decent’), while the Hitchhiker’s Guide To The Galaxy-referencing So Long, And Thanks For All The Fish takes our trajectory to its logical conclusion by absurdly ushering in the end of the world. The wistful Disillusioned (‘How did zombie media/Keep us obedient and unaware’) comments on the slow creep of online power, which barely existed when the band started. Elsewhere, the lyrics are more oblique but no less damning in tone.

Eat The Elephant is accomplished, but those expecting a musical follow-up to Mer De Noms and Thirteenth Step will be left wanting, and would be better off listening to Billy Howerdel’s 2008 Ashes Divide solo project. While singles TalkTalk and The Doomed have a hint of the guitar squalls and aggressive percussion that bled through to the band from 90s alt-rock back in the day, melancholy piano is now a lynchpin throughout, and even has its own instrumental in DLB. Most of the songs have more in common with Maynard’s mid-paced, measured side-project, Puscifer – not surprising given he’s made three albums under the name in the intervening years, and drummer Jeff Friedl is in the current APC line-up. The quirky electronics on Get The Lead Out conjure an image of Puscifer’s Carina Round busting out her signature moves (Google her, she’s great). But perhaps the biggest change is that Maynard’s vocals are more meditative, often shunning the vivid anger and passionate delivery of the past in favour of downbeat observation. It means that even when the message is important, Eat The Elephant sometimes fails to make an emotional connection. It doesn’t help that some of the songs lack immediacy; Delicious is a struggle to recall even after multiple listens.

If you’re a fan of early A Perfect Circle, it’ll be difficult not to feel a little bit disappointed – especially when glimpses of intensity burst through, and especially after such a long wait. But if you can accept their current incarnation and submit to it, then there are subtleties to discover on this thought-provoking return.