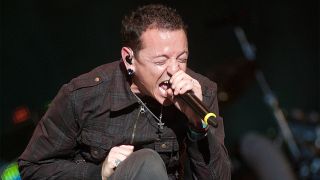 Nu metal had begun churning up the scene in the late ‘90s, but it was Chester Bennington who really brought it into the mainstream with Linkin Park, displaying the desire for musical innovation that would come to characterise his career.

Born in Arizona in 1976, Chester moved to Los Angeles at age 23 to join a fledging band called Xero, who would later become Linkin Park. After experiencing abuse and addiction in childhood, he brought his experiences to bear on 2000’s aptly named Hybrid Theory, which married rock and rap metal with dark, universal lyrics about depression and frustration. His screamed vocals, twinned with Mike Shinoda’s rapping, struck a chord with a generation. The album shot up the charts, making the slight, spiky-haired Chester an unlikely figurehead.

Despite Linkin Park’s success, Chester still struggled with addiction, and in 2006 he came to a crossroads where he decided to seek therapy, finally addressing the issues he’d buried for years.

Third album Minutes To Midnight signalled a sea change, as the band teamed up with legendary producer Rick Rubin and stepped away from their aggressive, nu metal roots. The result was more a more restrained Chester and a stripped-back sound that kept their melodic choruses but courted an older, broader audience, and divided those who had fallen in love with their heavier music. The band would continue to evolve their sound with every release.

“When we talk about lyrical content, we can’t just go back to being that angry kid,” Chester would tell Metal Hammer in 2016. “We need to talk about something that makes sense to who we are today.”

Chester was never short of ideas, and branched out with side-project Dead By Sunrise in 2005, playing a mini set during Linkin Park’s headline set at Sonisphere in 2009. Later that year, the band released Out Of Ashes, a set of polished, radio-friendly rock songs that belied his distinctive, pain-filled lyrics. Some of songs took on the edge of his heroes, Stone Temple Pilots.

For all Chester’s successes, a career high was joining that band in 2013, following the departure of troubled singer Scott Weiland. Stepping onto stages with them was a dream come true. He brought his own distinctive voice to the material, respecting the songs but making them his own, and together they wrote high-energy EP High Rise. “I know what kind of human being this guy is,” bassist Robert DeLeo told Rolling Stone at the time. “It’s not about him sounding just like someone. I’m talking about the quality of the human being.”

Despite his strong presence onstage, Chester was a private person and revealed little of himself to the outside world, preferring to speak through his work. “I appreciate that people know me for my music and that’s why they like what I do. They don’t know what I do outside of music and that’s intentional,” he told Metal Hammer in 2014. “I like going to the grocery store, I like going out in public and hanging out being another dad at the baseball game, and that’s something we cherish – the attention you want to get is the attention you do get.”

He continued to push boundaries with his music, with Linkin Park releasing controversial seventh album One More Light in May, featuring opinion-dividing collaborations with rapper Pusha T, grime artist Stormzy and electropop star Kiiara. Predictably, it charted highly across the world.

Sadly, his friend Chris Cornell took his own life in the same month. Chester came forward to sing Jeff Buckley’s version of Hallelujah at the funeral, and dedicated One More Light to him during an appearance on American talk show Jimmy Kimmel. Today was Chris’ birthday. “In terms of closeness, in terms of intimacy, it was really quite special,” Chester said of their bond. “Our friendship grew beyond just respecting each other for what we do musically.”

Chester Bennington’s passing is a huge blow to our world, and a talent lost far too soon. From his zeitgeist-capturing songs, to his ability to meld together genres, he was a man greatly respected by his peers and fans across the generations. Our scene will miss him dearly and his impact will never be forgotten.

If you would like to know more about mental health problems, or are looking for someone to talk to, the following organisations can offer support

Samaritans offer a confidential, non-judgmental service for people to talk through their worries. It’s free to call at any time, day or night.

The charity is leading a campaign to find solutions to mental health issues in the music industry. It offers advice and support to musicians of all genres and stature, including those who suffer from long-term problems or have recently hit a crisis in their life.

Linkin Park: How We Made Hybrid Theory