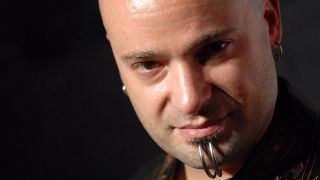 David Draiman is a man who speaks his mind. Throughout Disturbed’s career, he’s never been afraid to shy away from confrontation or controversy, whether that’s tackling critics of his ban, addressing hot-button topics such as the Israel/Palestine conflict or even calling out his own fans. At the same time, he’s an unashamed bon viveur – a man who likes the finer things in life, whether that’s wine or women. And while fatherhood hasn’t mellowed his outlook on the world, he does at least have a sense of humour about how the rest of the world sees him.

Disturbed emerged from Chicago during the dog days of nu-metal, though they owed little to that movement. But they’re the rare contemporary metal band who have remained consistently successful, weathering passing trends as many of their original peers fell by the wayside. This is in part down to the frontman’s force-of-nature personality, onstage and off. He may rub some people up the wrong way, but you get the feeling that’s exactly how he wants it.

What are your earliest childhood memories?

“I would have to say that one of my favourite things to do when I was a toddler – this was when we’d moved from New York to Chicago when I was about three years old, just about the time my baby brother was born – was going with my family to this park called Indian Boundary Park. That was one of the best places to go. They had this little merry-go-round and my mum would bring my little brother in the baby carriage and I would go and play with the other kids.”

Do you have any other brothers of sisters?

“No, just my little brother. I get on well with him. He lives in Israel, so I don’t get to see him very much. He lives in Jerusalem with his new wife. Last chance I had to see him was last summer when he married. That was really beautiful and nice. I kind of miss him. We always were close. He’s lived there since he was 18, but he used to visit the United States every year, but it’s become more and more infrequent with his family obligations and his job. He’s a social worker out there and he’s just finished getting his Masters and he should be finishing his PhD as well.”

So brains run in the family then. You triple majored at Loyola University didn’t you?

“I soaked everything up like a sponge. I was motivated on two levels – I wanted to get out of there as soon as possible but I also had a genuine thirst for knowledge. I studied Political Science, Philosophy and Business Administration.”

Studies weren’t always foremost in your thoughts though. You were expelled from five boarding schools, were you not?

Why were you expelled?

“Numerous reasons. You have to understand the kinds of institutions these places were. Imagine an incredibly difficult Catholic hardcore boarding school, only instead of Priests they were full of Rabbis. Basically we were not allowed to watch television, go to the movies, we were not allowed to read a newspaper. We could not look at a magazine like GQ even, in case there were pictures of girls dressed in lingerie we might get excited. We were not allowed to fraternise with the opposite sex whatsoever. We had to wear specific types of clothing – button sewn collars, suit pants, a prayer shawl underneath our shirts. We had to pray three times a day. We had to bless before we ate, after we ate, before we went to the bathroom, after we went to the bathroom, for every little thing there was a blessing. And they would watch you. It was just very stifling, not a normal adolescent existence.”

That sounds rather excessive for someone who would already have had a taste of what normal adolescent life should be all about. In what ways did you rebel?

“The first place I ever went to in Milwaukee, I was pretty much singled out as a rebellious freshman the minute I turned up. I’d do things like sneak guys out to the movies, slipping the cabbie 10 bucks to lose the Rabbis tailing us. In my late grade school days I’d started smoking a little weed and I enjoyed it. I still had a connection at high school, so I’d smoke a few of the guys up, so I became the, quote, unquote, ‘drug dealer’. I’d set up dates with girls I knew from grade school, so suddenly I was a pimp. I’d take the Rabbi’s car for a joyride as a joke and suddenly I was a car thief.”

What was the worse thing you ever did?

“Well they could never prove it, but I guess the worse thing I did was during a holiday called Purim. That’s a holiday that commemorates the Jews almost being exterminated in Persia in ancient times. There’s these characters in the Purim story, one called Haman, the evil character, and the good character is named Mordechai. The tradition is that you’re supposed to drink and get drunk so you can’t tell the difference between Haman and Mordechai. You’ve got a whole bunch of underage kids and it’s okay for these Rabbis to break the law and get these kids drunk. So we’re all drunk and the principal of the school, in a fit of rage or for whatever reason, fuelled by his inebriation, close-fist punched me in the face while we were all dancing and singing and having a good time. The music stopped, and I had blood coming from my lip, and I gave him a look and walked off to my room while they continued. Early next morning I got up, got a tyre iron and some cinder blocks, and took the wheels off his van leaving it on the blocks and rolled the wheels into the lake. There was a big assembly the day after and he said publically that he suspected me but he couldn’t prove anything. So next morning I got up early again, went to the gas station, got a gas can full of gasoline and went and set his van on fire and it blew up. That was probably just about the worse thing that ever happened.”

That sounds like the kind of hi-jinks a lot of normal teenage boys get up to.

“It was. My father was away at the time, serving a prison term, and he and my mother felt it would be easier for me to be in a scenario where no one else had their parents with them either. They were still trying to make me into this ultra-orthodox kid who could potentially be moulded into a Rabbi one day. And I couldn’t stomach it. We went through three different schools like that. I once got expelled forom one for merely pulling a fire alarm.”

Music must have been something of a release for that rebellious streak in you?

“Oh it was my outlet. The only thing I had. As a child I had trained as a Cantor, who leads the Jewish congregation in prayer, so I’d had quite a bit of vocal training. And that’s still with me to this day. I first got involved in music when I was at a school in LA, a punk rock band doing covers of Ramones and Sex Pistols and a couple of originals. I got involved in a lot of decadent behaviour as well.”

How did all this affect your relationship with your you had with your parents?

“Not good, ha ha! It became more and more adversarial. A battle of wills. I had an affair with my female maths tutor at my last boarding school, which probably wasn’t the best thing in the world to do. Our relationship is much better now. They weren’t happy when I quit my job as a Health Care Administrator to go front a rock band. But it’s funny how success seems to make everything okay.”

Yet for all the rebellion, you were a good student who achieved things academically. You were on the verge of joining law school and you used your Business Administration degree to run Health Care centres before you joined Disturbed.

“Yes. All throughout high school I got good grades. I always paid attention to studies no matter what else I might have done. I was never terrible. I never stole from people or hurt anyone. It wasn’t unusual stuff for a boy to get into. But I went to Israel for a year to look into religion on my own and decide what I wanted to believe and what I didn’t. But I was successful at University, and I also had a band on the go. Disturbed is actually my seventh band. And I was accepted into seven law schools but couldn’t go through with it.”

As someone who clearly enjoyed the more colourful things in life, Disturbed must have offered you even greater opportunities to, well, give in to hedonism.

“My love for existentialism and hedonism is long running my friend, ha ha ha! It definitely has its foundations in my youth and I continue to try and suck the marrow out of life. When opportunity knocks you have to open the door. My appetites are always tempered with knowing my limitations. I always need to keep myself in a certain state of check because my body is my instrument. And yet I’m probably the guy in the band who indulges himself the most as I’m the lone bachelor. And I do what I do. I like to have a good time and enjoy life without reservation and apology.”

Have you ever heard the rumour that you were an agent for Mossad?

“Aha ha ha ha ha. That’s funny. One of my uncles used to work for The Mossad. But no, I was never an agent. That’s very funny.”

Despite not taking a religious path, you still seem resolutely proud of your Jewish heritage.

“I’m very proud of it. Who am I to deny what six million people died to preserve. Both of my grandparents on my mother’s side were in the camps and survived, but their entire families were wiped out completely. I have a tremendous sense of pride, and also for the continued existence for the state of Israel, pride in perpetuating the prosperity and the peace, hopefully one day, of the Jewish homeland. I’m also an American and I love living in the United States. As much as I sometimes disagree with what our policy makers do, I love my country. I’m proud to be an American, I’m proud to be Jewish and I’m proud to be a member of this band.”