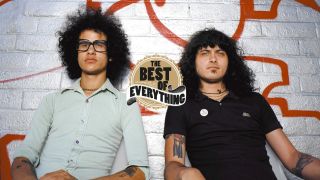 Omar Rodríguez-López and Cedric Bixler-Zavala were the main driving force behind The Mars Volta, and one of the greatest things about that band was that they did whatever they wanted to do.

Their previous band At the Drive-In were a very progressive band in the hardcore punk rock scene. They were pushing the boundaries there, especially during the later albums. They also did a bunch of dub reggae stuff in a band called De Facto, and that dub sound fed into The Mars Volta as well.

Someone played me their first album De-Loused in the Comatorium in 2003. I was blown away and it captured my imagination immediately. The playing was really frenetic, and songs like Inertiatic ESP were really atmospheric and trippy, with some really far out sounds, and incredibly intense drumming. When that song kicks in, it’s spectacular.

None of the songs were really for the radio songs, but MTV still played the videos for Inertiatic ESP and Televators – one was animated and one was live. But they weren’t really going for any singles. It seemed like they just wanted to make a body of work, and I really respected that. It’s so rare these days to see a band making an album for the sake of making an album, and that’s kind of what we’ve always done in our band.

After De-Loused, I carried on listening to them. They put out another five albums, and each one was different. There was always the same sort of attitude behind the music, but they kept evolving and changing. The last album Noctourniquet [2012] was very electronic sounding for instance, and they ditched a lot of the guitars for synths, which gave it a whole new lease of life.

They’ve always employed some of the greatest players too: from John Frusciante, Flea and Jon Theodore – who’s now with Queens of the Stone Age – to Thomas Pridgen, who’s now with Trash Talk, and [Issiah] ‘Ikey’ Owens on keyboard. He sadly passed away last year, but he played with Jack White and Mastodon. They were all just amazing players. And then you’ve got Omar, who basically drives the whole thing, and Cedric fronting it.

Omar is just incredible to watch on stage, as well as being an incredible songwriter and filmmaker, and whatever else. And the same with Cedric. He’s an incredible lyricist. On stage, he’s like no other. He’s one of my favourite front people to watch. He’s absolutely incredible, and a lot of the inspiration for me when I go on stage. I always try and summon up the spirit of Cedric whenever I can. He’s definitely in there with Freddie Mercury, James Brown and all those greats. They’re the people that I really try and imitate… badly!

So, for the purpose of this list, I went through all the albums and just picked out the tracks that I think stand out. But they’re all incredible…

**CONCERTINA *(Tremulant*, 2002)
This was on their first EP that they released in 2002. It wasn’t the first Mars Volta song that I heard, but it was really interesting to listen to it because it was kind of the precursor to what the first album would be. It felt like they were still trying to find their feet, and I found that really interesting. And this is a great song.

**ROULETTE DARES (THE HAUNT OF) *(De-Loused in the Comatorium*, 2003)
I like The Mars Volta because they’re such a varied band. They mix a lot of Latin sounds in there, and all sorts of other weirdness, and you can hear all of that in this song.

**DRUNKSHIP OF LANTERNS *(De-Loused in the Comatorium*, 2003)
Their song titles are completely off the wall as well. And as we go through this list you’ll see they end up actually making up their own words, which is even better. Drunkship of Latterns is fantastic.

**CASSANDRA GEMINI *(Frances the Mute*, 2005)
This was an interesting album because it came out in 2005 and it was meant to be a five-track album, with the fifth track being a long half-an-hour song. But the record label wouldn’t give them the money for an album because it only had five tracks. They were expecting at least eight or 10 tracks for a full-length album. That meant the band was only going to get paid for an EP’s worth of material, so what they did was basically split up the fifth song into four parts. I’d like to choose the second half of Frances the Mute as one song, as it was originally intended to just be one long piece of music. I think this is a great starting point for anyone who hasn’t heard the band as well. Although it’s long and really intense, it goes through all the emotions and sounds that the band do. There’s loads of really cool stuff in there.

**MECCAMPUTECHTURE *(Amputechture*, 2006)
On this album they seemed to go more technical in a way, almost mechanical. They were messing around more with jazz and things like that. It’s a really great album. And the song I’m going to go with is Meccamputechture, which has a really awesome section where it breaks down into this low dubby bass riff, and you can really hear the old dub influences coming through.

**WAX SIMULACRA *(The Bedlam in Goliath*, 2008)
This was the single off The Bedlam in Goliath, and I think it’s one of the only songs of theirs that’s less than three minutes long! It almost fits to the format of a radio single, and that’s kind of why I chose it really. The rest of the album is totally awesome, like all their albums, but it’s interesting to hear them do a short pop song as well as the epic eight or nine minute tracks.

**TEFLON *(Octahedron*, 2009)
Octahedron is another great album, and there are some real classic rock moments in there. There’s a song on there called Since We’ve Been Wrong, and it’s a really nice ballad. But I’m going to go with the song Teflon, which has really awesome lyrics. Cedric jumps around a lot in his lyrics, and I like that because they’re very playful and it leaves a lot up to you as a listener to decide what he’s actually talking about. But there’s some great imagery in there of this torture method where people put tires around you and then set you on fire so you can’t escape. I don’t know why, but that’s always really stuck with me in my mind. It’s just so strong and powerful, I guess.

**THE MALKIN JEWEL *(Noctourniquet*, 2012)
This was another single. It kind of sounds like broken reggae, mixed with their own touches of punk rock. It’s almost like At the Drive-In meets The Clash. It’s a really cool song and has a really cool groove. It sounds all bendy. The Mars Volta were definitely a niche band and they weren’t for everyone – but that’s fine. And I think that’s a really important message. You don’t have to cater for everyone, and you shouldn’t. So The Mars Volta are a massively important band in that sense.

Chris Georgiadis was speaking to Matt Stocks. Turbowolf’s album Two Hands is out now through Spinefarm.