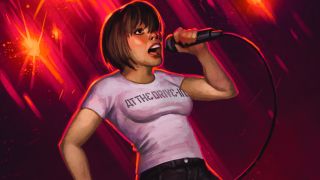 “Firstly, as a live band they will go down in history. Some of the footage you see online is unreal. And someone that is inspiring to me at every gig we ever play is Cedric Bixler, because he’s my favourite frontman of all time. I think his stage presence is amazing, the way that he moves onstage is really unique in heavy music. Seeing someone that didn’t just want to be this macho guy and instead dance his arse off made me think that this was something I could do. I could identify more with that than some big guy doing all this macho posturing. And his voice is incredible as well, the range and the passion combined. There is no one that can top him, in my opinion.”

They Refused To Compromise

“I completely respect the fact that they wanted to maintain their integrity. It’s incredible that a band who were at the absolute top of their game and with the world at their feet would actually decide to break up. Most bands would have got to the point that they were in and thought,‘That’s it, we’ve made it!’ But they thought that there were more important things going on in their lives, and they refused to compromise. I’m very respectful of that level of integrity.”

They Inspired A Generation

“Even though Rolo don’t actually sound like them, we certainly would not make the records we have made without the influence of At The Drive-In. They have shaped so much for me, musically. There were bands that I was listening to after I started Rolo that I got into purely because of the ‘For fans of: At The Drive-In’ factor. It seemed like a lot of those bands started cropping up after they split up, and they opened a lot of doors for bands that would never have stood much of a chance getting some recognition otherwise. And a lot of those bands sound unrelated, but have taken just one aspect of their sound, because the music they made was so unique.”

They Broadened Horizons And Blew Minds

“I think when they were around they did shape people’s taste in music. I was only 13 when they split up, so I wasn’t a fan when they were actually together, but James’s [Spence, Rolo synth man] favourite band were Hundred Reasons and he heard them saying how great At The Drive-In were. So he got Relationship Of Command and said, ‘You have got to listen to this!’ And it just opened up my eyes to so many new sounds that I’d never heard before. Another band that have been hugely influential on Rolo Tomassi are Pretty Girls Make Graves, and that was purely because of their connection with At The Drive-In, even though they don’t sound alike at all.”

Their Lyrics Are Deep And Mysterious

“Following them over the years, I’ve found that their lyrics are still a mystery. I like to pore through them and try and work them out, but still there are times when I don’t know exactly what he’s talking about. You need to look up language and phrases and you still might not even be close to the meaning. I find that influential to me as I want to be personal and pouring my heart out, but not have everyone knowing what it is I’m saying. And they have that, for me. That depth in the lyrics adds to the intrigue.”