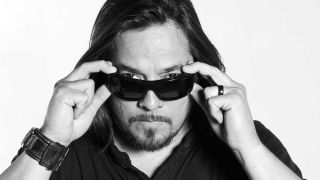 The band – which featured John Garcia, Josh Homme, Brant Bjork and Nick Oliveri – honed their craft by playing free shows at “generator parties” in the Californian desert. Before their split in 1995, the band released four full-length albums and would see Scott Reeder and Alfredo Hernández pass through their ranks. Their second album, Blues For The Red Sun was released in 1992 and is widely regarded as a stoner rock classic.

Here, vocalist John Garcia combs through their legendary back catalogue to rank 10 of their definitive moments…

"Blues For The Red Sun was somewhat of a breakout record for Kyuss, and the first song on my list would be Thumb. When Josh (Homme) and Brant (Bjork) brought this melody and this song to me I never knew it was going to make as big an impact as it did, but it was always something we really enjoyed playing live. I remember the first time we played it in Milan, Italy. We didn’t know what to expect but it got quite the reception. I remember us not being able to hear ourselves because they were screaming the lyrics so loud at us. It was an amazing experience, and it’s a really cool song. I give credit where credit’s due, and Josh and Brant wrote a great song there."

"This is a song that Brant Bjork wrote, and I still play it live to this day. I’m very proud of my past and I’m very proud of Kyuss – if people want to hear songs that I sing and the band Kyuss used to play, I’m more than happy to expose them to that. It’s not about whether or not you were lucky enough to hear the band back then. It’s still fun for me to inject these songs into songs that I’m doing in my set, and anybody who knows anything about my career knows that I don’t stay in one spot for very long. It’s my right to play whatever I want to play, whenever I want to play it, however I want to play it. It’s my God given right, and I’ll do so until the day that I die. So this is a song that I very much enjoy singing, and I think that the people like it too."

"Josh and I wrote this together, either in his bedroom or his garage. I don’t really think about how, where or when these songs came to be very often these days. As a matter of fact I don’t think about it at all. But Hurricane is just one of those fast, quick songs that we knew immediately was going to be on the record. And I’m still very much engaged with this song, and I have a strong relationship with it. At the moment it’s not in the set list for when I come back to London in July, but you never know it might be – I’m thinking about it."

"This was another one of those songs that was done before we got in the studio in Sound City in Van Nuys, Los Angeles. But it took on a new shape once we got in the studio. It’s one of those tunes that’s stuck with me. And for lack of better words, it’s just fun to sing. We wanted to get that sound from the desert into the studio. And who was going to help us do that? Our conduit, our producer Chris Goss. He saw us out in the desert, and he saw us play in clubs in Los Angeles. And to be able to capture that live sound in the studio was fairly easy for him. As a band, we were young, passionate, and very hungry to get it down on tape and capture that energy from the live show. And Chris Goss did a great job."

"I do remember Brant Bjork sitting me down in his bedroom and saying, 'I’ve got this song, it’s called Green Machine, and this is the way it goes.' He started singing it to me and it wound up to be one of the Kyuss anthems. I think people definitely still enjoy hearing this song live, and it’s one I always put in my set list no matter what band I’m playing in. It’s still a very intense, very heavy, very emotional song, and it’s still very fun for me to sing."

"We have a video for this song and I had a great time doing it, with Josh, Brant, Scott (Reeder), Alfredo (Hernandez) and the director Fred – who’s sadly no longer with us. I think he did a few Tool videos as well. This was also one of the first songs I had to do speech level singing on, and it was something that I wasn’t accustomed to. So it actually took me about 12-14 hours to sing up at the Sound City booth, because it couldn’t get it down as I was so used to pushing my vocals more and doing a lot more screaming. But it came out great in the end, and Josh was right there with me coaching me along like he always did. It was a great experience, it’s a cool song, and I still dig it to this day."

"This song is the epitome of what Kyuss did: power, emotion, and feeling. You have something that’s very heavy, and then there’s this beautiful lyric and melody on top of it. That’s what Kyuss was all about in my eyes, and this song speaks to that point. When you put something beautiful over something that’s heavy, mean, and melodic, sometimes it marries really well. This is what this song does perfectly for me."

"It’s hard to back and listen to these songs and think about how they make me feel, but I still really relate to this song. It brings me back to that time when I was in the garage, in the bedroom, in the studio, listening to Josh and Brant talk about lyrics and melody and how the songs should go. This is all I wanted to do at this point in my life. I was enthralled in only this, and this song brings me back to exactly that. For me, it wasn’t about drugs or girls or anything else. I was just totally focused on my band, and that was it. This music turned me on. And these guys did it for me. I can’t speak for the other guys because I don’t know how they feel, but I think this is all we wanted back then. We were all just so enthralled in the music. And this song is one that’s just quick, fast, heavy, and emotional. I love it."

"If you were to put vocals to this song, they would ruin it. Although we never played this song live, there’s always been a part of me that wants to go in and sing vocals over it. So there’s a battle there. I really want to see where it would take me. But even without vocals, it’s just a great instrumental song. Kyuss knew when to put vocals on tracks, and when to leave them out. And this is still one of my favourite Kyuss songs."

"I have more of a personal relationship with this song because I had a lot more involvement with it. As Kyuss grew, I became a lot more creatively active and involved in the writing process. We wrote this song when we were in a warehouse in this little town called Bermuda Dunes, which is right next to Palm Desert, and we were rehearsing away. It was still very fun for us at this stage. This was our lives and our livelihood, and where we wanted to be at the time was right there with each other. Scott had come up with this riff, I came up with the lyric and the vocal melody, Josh came up with his guitar part, and Alfredo came up with his drumming piece – it was all very natural. It was one of those songs that just came together, and it was very apparent that this was going to be something special for us. It’s a song that I’ll always have in my set list, and a song that I’ll always play live. I have an emotional attachment to this song that will never die. And I’m grateful for the opportunity to talk about it."