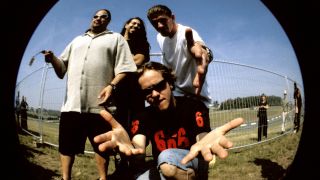 If it ain’t broke, don’t fix it. Industrial metal pioneers Fear Factory practically live by this motto. They struck gold in the 90s with their harsh industrial sound, and carried that hard-hitting style on into the 00’s. And while their evolution over the years isn’t one of monumental changes, it is one of complete conviction in the Fear Factory sound. One of the most admirable perks of the group is their unwavering desire to stay true to themselves and their sound, despite changes over the years in public opinion and whatever the current musical trend might be at the time. One thing that’s always certain about a Fear Factory album is that it will be the musical equivalent of getting your head repeatedly stomped on by The Terminator, so get your helmets on as we rank their uncompromising album releases from worst to best.

There’s an underlying care taken with a Fear Factory release, with the band threading dystopian narratives into their driving anthems, like the intertwining storyboards of Obsolete, Demanufacture and The Industrialist. Unfortunately, the machine malfunctioned on 2005’s Transgression. The sound and production on the record leaves a lot to be desired. It was rushed and it comes across that way, despite a few saving graces like the aptly titled Spinal Compression, the soaring, hook-laden Supernova and the primal powerhouse Moment Of Impact.

The band’s 2004 release Archetype was their first release after reforming and splitting with guitarist Dino Cazares, and despite tracks like the thunderous opener Slave Labour and the relentless battering ram Corporate Cloning hitting the mark, there’s an overwhelming sense of emptiness and aimlessness that plagues much of the LP. Although it’s worth a listen just for the anthemic gem Bite The Hand That Bleeds.

With Rhys Fulber on production duties again, the sound of 2012’s The Industrialist is wonderfully on point despite the lack of a live drummer. Songs like Recharger and God Eater pop from the speakers with genuine intensity, while cuts such as the cyber apocalyptic title track and the percussive barnburner Virus Of Faith provide the transcendent moments that have become a staple of the band’s sound. However, while The Industrialist is actually a solid collection of tunes, it just doesn’t contain enough outstanding moments to be considered one of the group’s finest.

Following up 1998’s Obsolete is no enviable task. The group found themselves in this uphill battle on 2001’s Digimortal, sounding for the first time like they were compromising their musical style somewhat. On a positive note, the synthesizer sections on this LP are simply fantastic. From the futuristic lasers of Damaged to the stuttering interceptors of Linchpin – the electronic aspects of Fear Factory’s sound, and especially this album, can’t be overstated. Despite this, songs like the rap-heavy Back The Fuck Up sound awkwardly out of place, leaving the record languishing with some unwanted filler.

There seemed to be renewed vigour when the band signed with Nuclear Blast, a move that gave them razor sharp focus on their latest release Genexus. It possesses the melodic components that the group effortlessly mastered in the 90’s, with frontman Burton C. Bell expertly applying his trademark clean vocals to tracks like Anodized and Dielectric. Don’t go thinking they’ve gone all soft on us though – songs like Soul Hacker and Protomech are some of the heaviest compositions in the band’s arsenal.

It was clear from the group’s debut album in 1992 that they were a different beast altogether. Nobody else was merging the toxic combination of death and industrial metal except Fear Factory, much less producing genuine heavy hitters like the scalp scraping Scapegoat or the primitive growler Flesh Hold. As far as debuts go, they don’t come much more loaded with ambitious intent than Soul Of A New Machine.

Many would forgive the seasoned veterans for changing their style to reach a wider audience, but with 2010’s Mechanize, the band did the complete opposite. You only need to go as far as the off-the-walls intensity of the title track (a song that couldn’t be any more pulverizing if it tried) to see that this was a major return to form. From there the group proceed to decimate everything in their wake, obliterating the sound barrier with sonic bombs like the rhythmic exploder Powershifter, the frantic belter Controlled Demolition and the whiplash inducer Designing The Enemy. The closer entitled Final Exit, comes close to reaching the heartfelt sentiments of mainstays like Resurrection and Invisible Wounds (Dark Bodies), a delightful way to wrap up a record of such crushing proportions.

Talk about an album of highpoints. Highlights practically litter this mechanical monster from ‘98, with the band hitting particular peaks on the electrified, sensory overload Shock, the drilling punisher Smasher/Devourer and the emotive epic Resurrection. This was the album that launched them into the upper echelons of metal, and rightfully so. Not only that, but thanks to melodic beauties like Descent and Resurrection, fans for the first time heard a beating heart underneath the complex robotics.

On their 1995 sophomore release Demanufacture, the band refined and sanded down the rougher elements of their sound. The results were simply groundbreaking. There isn’t a wasted moment on this virtually flawless LP; from the kick drum extravaganza Self Bias Resistor to the contorting synth-infused New Breed – the band compress their steely sound into burning molten rock. But the best song plaudits go to the devastating metal classic Replica for its effortless balance of melody and dissonance. The nodes aligned perfectly on Demanufacture, leaving an indelible mark on the decade and remaining to this day one of the most forward-thinking metal albums ever created.

Rise Of The Machine: The untold story of Fear Factory's Demanufacture