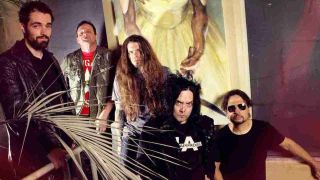 Sometime around 2006 Amen founder and frontman Casey Chaos vanished from the radar... only to return in 2012 very drunk in Ministry's movie Fix and in handcuffs on TMZ having been arrested for drunk driving. Now Amen are back with a new album, a surprising new drummer and their first UK shows in an age. We thought it was time we caught up with Mr Chaos to join the dots.

Where the hell have you been, sir?

Casey: “I’d never stopped going since I was ten years old, skateboarding and then being on the road, doing everything I could to get out of shit Florida. I just never stopped, never took a break, and never woke up going, “What am I gonna do today?” I always knew. So after doing the Scum record and everything I did, I was like, “Okay, I need to take a break.” I still continued to work, I made three Amen records with Larkin that never came out – they’ll probably be coming out free online.”

Can you tell us about the TMZ incident? Punk rock singer arrested for DUI after multi-car smash up!

“My biggest press of all time! Congratulations! Whatever, it was another night of mistakes and beautiful garbage.”

Did you get probation?

“Oh yeah, that whole thing was a nightmare, mainly because what the police reported wasn’t true, it was completely out of proportion. But anyway, many lawyers later and everything’s fine. It was a real mistake and a real wake up call.”

“Everybody says that! All my closest friends say that if I’m not on stage I’m destroying myself, so that’s definitely my demon. It gets bottled up, I guess, if I’m not being creative, and it really comes to life in my personal life. I mean, I have been working, just not performing live because of health reasons and a lot of other reasons. I just wasn’t in that spot. A big thing, for me, was Larkin is the drummer who’s been on Amen records, apart from Roy Mayorga doing a few songs on Death Before Music. I love him too, but both those guys are in other bands now and it took a while for me to find the right guy.”

Not just any right guy, [former Slayer drummer] Dave Lombardo! How did that come about?

“It originally came about because I got a call to work on the soundtrack for the House Of Shock movie. Dave Lombardo was the drummer, Gary Holt was the guitarist, and we were a song writing trio, so to speak. We wrote a couple of songs in the studio and then I got Nick Oliveri to play bass on them. Gary and Dave and I just really hit it off. So now it’s developed into this. He’s still got his main band, he’s splitting duties, but I’ll take him any way I can get him! Otherwise, its the same line up that we’ve had for seven years, Tumor since the outset.”

Has Lombardo added a metal influence to your sound?

“On some songs that you would think he wouldn’t have that influence, he does have that influence, like on an Iggy-influenced song. But then, on some of the more metallic stuff, the more on fire stuff, there’s moments where he’s not so metal. He’s really interesting and amazing to see the way he creates. We’re hoping the record will be out early next year.”

It’s been a while since you toured the UK, it must been nice to have retained an audience while you’ve been away.

“I’m so grateful that people love us or hate us, but remember us. For me, its never been about commercialism, it’s been about following your heart, destroying it at every single opportunity you have. There’s so much of a lack of honesty in music, and it seems like since I went away the model is, become famous, don’t learn how to write songs or play them, just go in the studio and lay them down to a grid and make everything formulaic for the masses. The whole culture is just fucked! Bands that actually do talk between songs say the same thing every night! That’s like a job! Good for them, but I could never do that. I need it to be unpredictable and I’d rather have the ups and downs of depression and hatred and love, every fucking vibe there is, that be like, “okay, we turned up in our rock n roll suits for you to play a nice friendly concert. We’ll never be friendly!”

**Amen play London’s Camden Underworld on August 14 and the main stage at Alt-Fest in Northampton on August 16. **