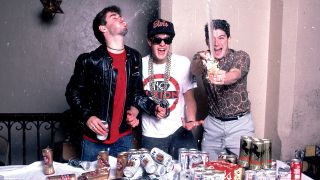 10) The Sounds Of Science

If you’re going to steal, you might as well steal from the best. For their ground-breaking second album Paul’s Boutique, the Beasties collaborated with inventive LA producers The Dust Brothers to piece together a complex sonic patchwork, spending around $250,000 on licensing samples. The Sounds Of Science grew out of a two chord riff ‘borrowed’ from The Beatles’ The End set against Ringo Starr’s drumbeat from the reprise of Sgt. Pepper’s Lonely Hearts Club Band, before The Dust Brothers slowing down the beat from When I’m 64 for the song’s main theme.

Not everyone appreciated the trio’s freewheeling approach to sampling. For their debut album, 1986’s Licensed To Ill, the Beastie Boys used The Beatles’ I’m Down as the template for a radically re-worked version of the song, but were refused permission to use the track by Michael Jackson, who had acquired The Beatles’ Northern Songs publishing company. Jackson couldn’t stop bootleg versions of the song appearing however.

It’s not often that the Eagles and Ramones sit cheek-to-jowl, but it’s a measure of the Beastie Boys’ imagination and eclecticism that they were able to set a sample from the Californian band’s Those Shoes (from 1979’s The Long Run album) alongside a snatch of Da Bruddas’ Suzy Is A Headbanger in this rolling cut from Paul’s Boutique.

Rick Rubin can take much of the credit for introducing the Beastie Boys to Led Zeppelin, but the New Yorkers continued to draw inspiration from John Bonham’s beats and Jimmy Page’s riffs long after parting ways with their former mentor. What Comes Around is introduced by Bonham’s instantly recognisably break from Moby Dick, and also features a snatch of guitar from Alice Cooper’s It’s Hot Tonight from 1977’s Lace And Whiskey.

The second track on the Beasties’ debut album Licensed To Ill found Mike D bragging ‘If I played guitar I’d be Jimmy Page’, and the band’s love of Led Zeppelin was made even more explicit on the following track, She’s Crafty, which is centred around a transparent steal of Page’s riff from The Ocean.

Originally denied permission by Jimi Hendrix’s estate to use a variety of samples from the guitarist’s catalogue, including snippets of Foxy Lady, Still Raining, Still Dreaming and EXP, on this tribute track on Check Your Head, the Beasties’ improvised by crafting sound-a-like riffs in the studio. Once the samples were officially cleared, they were restored in the version of the song released as a single in 1992. Incidentally, the album version of the song is prefaced with Cheap Trick’s live intro to Surrender from …at Budokan.

3) Looking Down The Barrel Of A Gun

One of the heaviest tracks in the Beastie Boys’ catalogue, referencing both A Clockwork Orange and serial killer Son of Sam, this hard-riffing fan favourite incorporates both a guitar sample from Mountain’s classic Mississippi Queen and a single, repeating piano chord from Pink Floyd’s masterful Time.

Nothing subtle about this one. The Beastie Boys’ 1984 Def Jam single featured the unmistakeable riff from Back In Black, used without the band’s permission. Despite Mike D personally phoning Malcolm Young to ask for clearance for the sample, AC/DC refused to sanction it, forcing the band to drop it from their The Sounds Of Science anthology, though it later emerged as a Def Jam single in Europe.

Ever wonder Black Sabbath might have sounded like with John Bonham on drums? Here the Beastie Boys have done the work for you, with this single from Licensed To Ill featuring not only Bonham’s iconic and widely-sampled drum beat from When The Levee Breaks and Tony Iommi’s guitar riff from Sweat Leaf but also a snatch of The Clash’s cover of I Fought The Law for good measure.