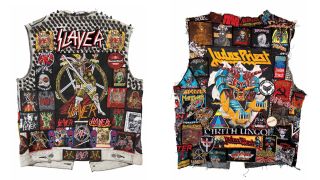 Yours might be black leather, embroidered with Watain patches, its back painted with Venom's Black Metal album art, or perhaps you prefer a light blue denim jacket adorned with all the thrash metal heavyweights from Anthrax to Destruction.

Whatever your style, your battle jacket is your very own, unique contribution to heavy metal history.

Nobody is more familiar with the humble patchwork vests than photographer Peter Beste. For more than two decades he has been documenting subcultures across the world, including the Norwegian black metal community – which informed his first book, True Norwegian Black Metal – an incredible series of photos portraying the most extreme end of the metal spectrum.

His latest book, Defenders of the Faith, is an ode to heavy metal culture through images of, you guessed it, the battle jacket – and through his tentative eye and treatment, Peter has elevated the iconic garment from festival campsites and city side walks to rubbing shoulders with the most prestigious folk art.

Check out the mail-order exclusive Artist Edition of the book being unboxed below.

We talked to Peter to find out where his tastes lie, whether or not he owns a battle jacket himself, and why he felt the need to document the garment in such a significant way.

Are you a metalhead yourself? What were the first metal bands or albums you discovered?

My music tastes have been all over the place throughout my life, but heavy metal was my first real musical obsession. I discovered Iron Maiden, Metallica and Guns N' Roses in the late 80s when I was in Elementary school through MTV and from my local 'tape store.' These days I’m listening to lots of classic rock, metal and old school country music.

Do you or did you ever have a battle jacket?

I had a very basic version in 1989 with some Metallica and Anthrax buttons. Since then I’ve made three more elaborate patched versions. Pages 138-139 in the book show two of the more over-the-top vests that I’ve made.

What bands were on it?

Of the three vests I currently have: One has an Iron Maiden - Somewhere in Time back patch, another with Manowar - Fighting The World, and one with the classic Motorhead logo back patch.

The other patches are a mix of different metal sub-genres with lots of bands like Heavy Load, Ashbury, Eternal Champion, Cirith Ungol, and some of my Norwegian friends, to name a few.

Are you a big black metal fan?

I do love black metal, but I’m not listening to too much at the moment. I tend to go in musical cycles, and where I am physically and mentally plays a part in what I listen to.

What inspired you to make this book?

Originally I planned to make a book of only vest photos – kind of like a still life photography project. A few months into shooting this, I decided that I should bring in a human element which shows the maniacs who make them along with genuine, heartfelt moments within heavy metal culture.

You are well known for your images of black metal icons thanks to your first book, True Norwegian Black Metal. You grew up a far cry away from this scene, how did you get involved in that?

I grew up in Texas and followed the scene from afar. When I finished college in 2001 I had a very strong feeling that I should travel to Norway and attempt to document this scene.

I decided to move back in with my family, save money, and finally travel to Norway for my first time the next year. I traveled there as an outsider not knowing anyone, and over several years got to know and to photograph most of the key Norwegian black metal figures.

Your book comes with a 7-inch soundtrack featuring two exclusive tracks from the Norwegian metal bands Aura Noir and Black Magic – two black metal bands, how did this come about?

Black Magic and Aura Noir are my two favourite active Norwegian bands, so this was very special to me. I really love to have an exclusive musical component when I release a book like this.

I think it really adds another dimension to the work. The only other time I have done this was for my Houston Rap book, where we released a DJ Screw 12-inch and 7-inch in the special edition.

I see it as a form of folk art that shows the person’s tastes, affiliations and ultimately their connection to heavy metal. I have a huge respect for it because I know the amount of time, energy and money that goes into making one’s vest.

Is there anything similar to a battle jacket in any other subculture?

Various cultures have been making decorative dress items that visually define their respective cultures for ages. A more recent and obvious historical example is the biker vest, which shows the rider’s affiliation as well as their place in the hierarchy of their community.

Are there any famous musicians photographed within this book?

Most of the people in the book are everyday metal fans, but I did include quite a few well known characters and bands, such as Fenriz, Sadistic Intent, Abbath, Manilla Road, Armory, Visigoth, Deathhammer, Blasphemy, Hirax, Archgoat, Savage Master, and Leviathan, to name a few.

I've noticed you travelled far and wide for the images, to a number of European festivals. How did you choose which ones to attend?

I found out the best festivals for old school underground heavy metal, both to fit my musical tastes and because those festivals often have the most interesting vests – especially Keep It True in Germany!

How long did it take you to compile the photos for the book?

I had the idea in 2015 and shot through 2018. As with all my projects, this was self-funded, so they tend to take me a long time! While editing the book, I went back into my archives of photos and pulled several that I took years before.

The earliest photo in the book (page 258-259) was taken at Milwaukee Metal Fest a few weeks before September 11, 2001. I also included a handful of outtakes from my True Norwegian Black Metal project.

Which images are your favourites?

I generally like the natural, non-posed images. When people are so lost in what they’re experiencing, they may not even know or care that the camera is there. They are truly in the moment.

Were there any images you couldn't include that you wanted to?

No, there was no censorship for this project. I did do one shoot a couple of years back of a woman wearing nothing but a battle vest, but that image didn’t really work with the vibe of the rest of the book, so it wasn’t included. Sacred Bones gave me total creative control with this project, and I couldn’t be more grateful to them.

Have you got any other projects in the pipeline?

I am working on a long-term project about UFO culture and am strongly considering releasing a small book of photos I took as a teen in the Hardcore scene.

Defenders of the Faith: The Heavy Metal Photography of Peter Beste, edited by Johan Kugelberg and forewarded by Biff Byford of Saxon is out September 27 via Sacred Bones. You can pre-order a copy here. The Limited-Edition and Artist Edition (with battle vest starter kit pack) can be pre-ordered at Sacred Bones.