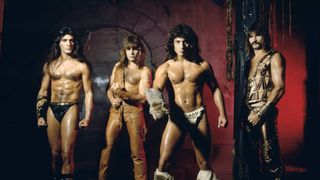 They are the self-appointed Kings Of Metal; guardians and saviours of the true metal code and the scourge of false metal charlatans everywhere. Assuming you actually like heavy metal, Manowar are about as pure and unapologetic as it gets and their catalogue bulges with gloriously bombastic moments and eruptions of uplifting, epic grandeur, including the following ten songs, all of which encapsulate the magic of New York’s finest purveyors of bloodstained sonic steel. Onwards, into glory ride! Go on. Seriously.

Long before Hollywood decided that they could make an absolute fucking fortune out of the comic book superhero world, Manowar were quite rightly singing the praises of everyone’s favourite hammer-wielding deity. If Eric Adams singing “Thor the mighty! Thor the brave!” doesn’t make you want to punch the air, someone should probably punch you.

Aside from singing about ancient Gods, bloody battles, heavy metal and – best of all – themselves, Manowar also provide a neat line in motivational and inspirational sing-alongs. Carry On’s message is simple enough: united, we will survive and prevail (preferably with some very loud heavy metal playing in the background). Plus, the tune itself is ridiculously catchy.

One of the most epic album openers ever, Call To Arms is a gloriously self-referential, erm, call to arms from the one band that never flinches from its duties as standard bearers for heavy metal. The moment when Eric Adams sings “Fight for the kingdom, bound for glory/Armed with a heart of steeeeeeeel!” is simply one of the most metal things that has ever happened.

What kind of metal do Manowar like? They like true heavy metal, not that false nonsense that they have nowadays. This paean to the worldwide metalhead community sums up the Manowar code of conduct perfectly: “Our hearts are filled with metal and masters have we none/And we will die for metal… metal heals, my son!” Brings a tear to the eye, that.

If you’ve ever pondered what the greatest opening line in any heavy metal song ever is, your search has ended. “Manowar! Manowar! Living on the road! When we’re in town, speakers explode!” There you go, job done. Kings Of Metal is also notable for the informative declaration that “other bands play… Manowar kill!” We assume that’s a metaphor and that Joey DeMaio hasn’t committed any murders in the name of metal. Although we wouldn’t put it past him.

Manowar fans will, of course, be familiar with the song Hail And Kill, from 1988’s Kings Of Metal album. It’s a brilliant song, but the band somehow managed to up the ante on their most recent studio album, The Lord Of Steel, by adding another none-more-metal verb to the phrase. The result is one of the most thunderous and celebratory moments in the Manowar catalogue.

Their detractors often claim that Manowar are silly. Well, if being fucking awesome is silly then heavy metal bands shouldn’t want to be sensible. Kill With Power is a brutal, fast and aggressive song about going berserk on the battlefield. Quite why that is sillier than whining about your personal life is anyone’s guess, but no matter… “Kill with power! Die! Die!” goes the chorus, and suddenly the world seems a better place.

For the uninitiated, the “black wind” is the ear-wrenching sound that comes out of guitarist Karl Logan’s enormous wall of guitar speakers. It has nothing to do with post-Guinness flatulence. Meanwhile, this perennial Manowar set closer goes like the bloody clappers and brilliantly showcases Joey DeMaio’s legendarily deranged bass playing skills. Definitely not false.

“We met on English ground, in a backstage room/We heard the sound and we all knew what we had to do…” Yes, it’s a song about Manowar, by Manowar, and it’s called Manowar. This is not only the most Manowar Manowar song of all time, it’s also a steel-plated classic from one of the greatest heavy metal records ever made (Battle Hymns, since you ask). Manowar. Mano-fucking-war. Officially more metal than you since 1980. You’re welcome.