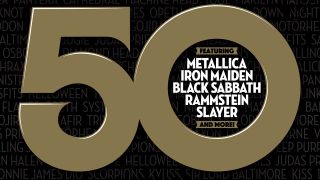 In the beginning it was an ‘underground’ form of music, derided, ridiculed and expected to fade away quickly and be forgotten forever. Instead it has grown, branched out and blossomed into the loudest, most powerful music out there.

In the new issue of Classic Rock we look at some of the movers and shakers, from its early inventors to current champions pushing it forward, who helped take metal to the masses.

It's available to buy now. Also: check out the Thunder Bundle!

Black Sabbath
As Earth they were going nowhere. Then they chanced on three notes once branded ‘the devil’s interval’, changed their name, and changed everything.

Iron Maiden
As the 1980s dawned, they were about to record their debut album. It was the start of a journey that would launch them into the stratosphere. But there were some massive hurdles to overcome first.

Metallica
From his stubborn individuality to his taste in music, Metallica’s late bass player Cliff Burton was a true one-off. This is his story.

Slayer
They’re one of thrash metal’s Big Four, and, more than 30 years on, their iconic Reign In Blood album stands as a benchmark for what heavy metal can and should be.

Rammstein
Over the past 25 years the German metallers have defied conventional wisdom and become superstars. Vorsprung durch technik? You betcha.

The Ultimate Heavy Metal Playlist
As we celebrate the 50 years of heavy metal, here’s half a century’s worth of pioneering heavy music, from the classics to the contemporary hard-hitters.

Thunder
Danny Bowes and Luke Morley submit to The Classic Rock Interview. The frontman and guitarist talk about the past, the present and the future of their much-loved band.

Volbeat
Frontman Michael Poulsen can look back on a life of hard graft and triumph over adversity.

Robin Trower
In the 70s the guitarist made his classic album Bridge Of Sighs with Jim Dewar. Today he continues to head up his power trio and shows no sign of slowing down.

Kris Barras
He gave up cage fighting to become a rock star, Now, armed with a new album, he is making good on that promise.

Play It Loud
Turn it up and get down with this month’s selection of the finest new high-voltage rock’n’roll. Including Stone Rising, London Ghost, Cosmic Rover, Bandolero and more…

The Stories Behind The Songs: Lynyrd Skynyrd
Ronnie Van Zant said that Free Bird had too many chords to write lyrics for, but it still became the band’s signature tune and a bona fide rock classic.

Six Things You Need To Know About… Whiskey Myers
The small-town Texans have taken their brand of southern rock storytelling across the globe, and even to prestige TV.

Record Store Challenge: Black Star Riders
We give Ricky Warwick and Scott Gorham £50 and take them vinyl shopping. Find out what they bought.

Buyer’s Guide: New Model Army
How to get the best from the Bradford band who’ve remained as uncompromising as they have unfashionable.

The Soundtrack Of My Life: Mikael Åkerfeldt
The Opeth singer/guitarist on the special records, artists and gigs that are of lasting significance to him.

Classic Rock 267 is in UK newsagents now, and available to buy online.