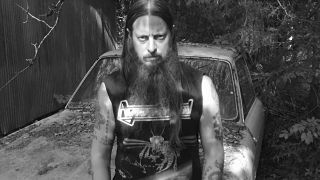 Every self respecting metalhead, whether a fan of the blackest persuasion or not, will have heard of Darkthrone. Along with Mayhem, Burzum, Emperor and a bunch of other bands living in and around Oslo, Norway, in the early-'90s they helped shape the look and sound of what became Norwegian black metal.

While the band have made a name for themselves while managing to admirably avoid the spotlight, you may recall that a few years back, Darkthrone's songwriter and blast-beat maestro Gylve Fenris Nagell – or Fenriz, as he is better known as – made the headlines when accidentally got elected into his town council with the help of his feline friend. But that's not all he gets up to in his spare time...

When he's not laying down the law in his borough, working his postal job or creating genre-defining brutal blackened metal – Darkthrone have just released a new single and have new album, Old Star, due out May 31 via Peaceville – he thaws out our ice cold hearts somewhat by voicing his enduring passion for music as a music journalist.

Previously hosting a Soundcloud radio show, he has now turned his attention to Spotify, launching his very own, personal playlist entitled FENRIZ METAL and it's a suitably heavy yet eclectic mix of black metal, '80s classics and much more.

"Hi metalheads and music-conoisseurs, I think the standard metal lists on Spotify is somewhat unpersonal (ofcourse) and safe (shouldn't have to be) so I decided to start working on an ETERNAL metal list for your; FENRIZ METAL."

The playlist includes tracks from heavy metal masters like Black Sabbath, AC/DC, Saxon, Metallica, Slayer, Rush, Motörhead and Iron Maiden, as well as (understandably) including more extreme metal pioneers such as Sodom, Possessed, Mayhem, Onslaught and Necrophagia... and even some occult rock from the likes of Coven and Blood Ceremony.

Have a listen below, and remember to follow because we are certain he'll be adding plenty more bangers to the list! You're welcome...