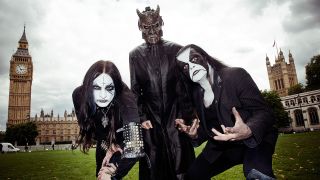 The mission is a simple one, and it is genius: spend a day with Abbath – an artist whose dedication to the OTT nature of black metal has made him the most uniquely hyperreal underground artist on both the planet and the meme-filled realms of the internet – and his new band and unleash them upon various London tourist spots, in full, corpsepainted glory. How will the typical English reserve cope with this monochrome threesome in their midst? Will the day end with Abbath clambering up Big Ben, one arm railing at the airplanes deployed to bring him down? All things are possible…

As Hammer waits for our midday rendezvous at the back of the green facing a disappointingly partially scaffolded House Of Commons, a group of about 30 Japanese tourists congregate in front of us, cameras clicking away. Don’t disperse, you know not what awaits you! Don’t…

Bugger. Opportunity lost, a cab pulls round, that face grinning out of the window, and three figures emerge, taking suitcases of the trunk with the aid of a non-plussed driver. Bass player, and former Gorgoroth member King – resplendent in his bespoke withered mouth markings and inverted cross upon his forehead and newest recruit – a tall, soft-spoken, trenchcoat-wearing Frenchman know as Creature, for reasons which will soon become apparent, walk around the concrete-lined garden barring immediate access, while Abbath, with that iconic diamond corpsepaint expertly applied, takes the route one approach, clambering up amidst the foliage and demanding we take him to the nearest pub.

Being placed within sight of the Commons, it’s quite posh. Bureaucrats and gatherings of older folk undergo a noticeable mental skid that takes a few seconds before any kind of mental equilibrium is regained – equilibrium that still has to account for three figures who have sauntered in from beyond their wildest imaginations. Abbath, King and Creature take up residence in a corner, next to some now-nervous older ladies trying to direct their attention to their fish and chips, and call for beer. And a burger. There is a particular ‛This is this. That is that,’ nature to Norwegians, which, if you weren’t used to it, could be mistaken for brusqueness, but it’s just that they occupy their own space with more conviction than is usual for us dissembling British types. Abbath is sitting crossed leg, arm across the back of the seating and head back and looking serious. “Make sure it has cheese,” his voice booms across the room.

Abbath is in need of pick-up. Beer, burger, and a shot of whiskey seems to have done the trick, and all three pop outside into the smoking area as Creature applies black eye make-up and a horned, scaly mask that bears no small resemblance to Ghost’s new get-ups – a distinction that’s lost on the two lads sitting outside and watching proceedings with genuine curiosity. “Are you a tribute band?” one of them asks. Within two minutes of chatting they’re having their pictures taken and been shown how to do horns, as more people get caught up in the gravity well and have pictures taken with they know not what.

It’s time for the first destination proper: the Horse Guards Parade. The reactions as the trio saunter up Canon Row – Abbath switching between head-up imperiousness and crabwalking for the camera, King a combination of stoicism and wry amusement – and past the entrance to Downing Street are a mixture of seen-it-all-before refusals to blink eyelids, double takes and rapidly dawning smiles while awed children pull on their parents sleeves.

Our arrival at the Parade isn’t met with quite the same level of enthusiasm. As Abbath, King and Creature take their place next to the horses, a uniformed woman bearing a machine gun walks up to us suspiciously. Thankfully it doesn’t take long to explain that they’re not some surrealist-terrorist unit out to strike at the heart of the British Empire and she goes back to her post, somewhat dejectedly.

Abbath is upbeat. “Who was the last band who did something like this in town? It must have been Kiss in 1975, so what the hell, right?” As we head back to the green, via numerous classic red phone boxes that, we soon learn, can’t hold three members of a black metal band at once, it becomes clear that the band’s presence is transformative, a lateral step away from everyday consciousness as all kinds of people ask to have their pictures taken with them, from anarcho-punk types with Amebix patches to businessmen, each taking a little piece of wonder away with them. We turn the corner, and, as if it’s a reciprocal gift from the gods above, there’s a busker in a gorilla suit.

“What do you mean ‘serious’?” Abbath enquires. Hammer photographer Ester Segarra is posing the band outside the Tower Of London trying to make the Nordic invaders look suitably majestic. We’ve just convinced a surly Beefeater to have his picture taken with the band, shy, staring children have, at the behest of their parents, come up to Creature for more pictures (“I guess black metal isn’t that scary…” remarks King) and all three are now standing on a concrete plinth, eventually standing proud with the walls of the castle offering a patriotic backdrop to the Norwegian invaders. It doesn’t last. Soon Abbath is running along the length of the plinth, jumping in mid-air, turning more heads, and stepping up to an ice cream van to order a hot dog from its incredulous occupant. Turns out it’s a better culinary choice than the next stop we had in mind.

“So you want to take pictures of me eating a bowl of cereal? No fucking way.” Ten minutes by car up the road is the very heart of hipsterdom, the Cereal Killer café. The idea is that Abbath is the antidote and a cunning Plan B is quickly improvised. You don’t have to eat the cereal. We arrive with a still dubious Abbath and rather than the sugar-saturated wonderland we were expecting, it’s actually tiny, and pretty empty too. A small family is tucking in in the corner and aside from us that’s the entire clientele. An accommodating man behind the counter offers us the run of the place, but downstairs looks like a kid’s playroom and thankfully there’s one item that seems appropriate now that we’re here, the box of Darth Vader cereal that Abbath is now examining the contents of. “You really want me to take a picture with this?” Err… yes? And quick as a flash, the manic Abbath face comes out, as one of the identical twin owners comes out from the back with his own camera. Should you ever decide to venture in, expect to see a new and entirely incongruous set of portraits on the wall. “That was kind of weird,” is the post-mortem on that.

We’ve broken Abbath. There’s one more stop across London and through the now rush hour traffic, and the exhaustion of two days of press is starting to kick in. We eventually turn off Marylebone Road, and soon enough we arrive at the car driver’s worst nightmare: Abbey Road. As ever, the pedestrian crossing is flanked by tourists taking turns to stop traffic and have their picture taken, but as soon as the trio get out of the cab, all attention is diverted as cameras start clicking in their direction. Taking pictures at Abbey Road – now rebranded Abbath Road – isn’t easy. Cars coming into view are a constant hazard, and it takes a rapidly draining reservoir of patience to get the shot just right. After three attempts at crossing the road you can see Abbath’s spirit starting to leave his body, before the gods look down on us once more, The Shot occurs, corpsepaint can come off and drinks are very much in order.

“Actually, I’ve never been to the Tower,” says a much happier Abbath over pizza in Tuffnel Park’s Aces And Eights bar. “I’ve been in London shitloads of times but we always go to the same places. A couple of years ago I went to the London Eye with a couple of friends, so I saw the Houses Of Parliament from there, but I’ve never been in that area before. And also I’ve never been to Abbey Road, so that was something even though I was a little tired and impatient, but when I think about, fuck, I’ve been at Abbey Road! We have walked over there. How cool is that?”

“Yeah, that was awesome! Heheheh! But there was no stress in the people around us. The only stress was me being tired, but fucking hell, it was a good atmosphere. I think I only saw one scared kid today.”

All photos by Ester Segarra.