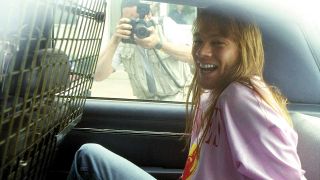 Axl Rose after being arrested at upon his return from a Europe. (Image credit: New York Daily News Archive / Getty Images)

The most dangerous band in the world. In modern times, that tag would be taken with a pinch of salt, smacking of an overzealous press office. But in the summer of 1991, Guns N’ Roses truly deserved the billing.

On July 2nd, as the LA rabble pulled into the Riverport Amphitheater, St. Louis, their reputation for chaos was already in place: there had been intravenous drugs, women of easy virtue, furores over lyrics deemed racist and homophobic, even two deaths during their Monsters Of Rock festival set three years earlier. But that night in Missouri marked the incident that would fuel the Gunners’ notoriety from here to eternity.

It all happened during Rocket Queen, on the home straight of a 90-minute set that had passed without incident. With drummer Matt Sorum striking up the chippy beat, Slash and Izzy Stradlin stoking squalls from their guitars and bassist Duff McKagan adding a seismic rumble, the song’s snakecharmer riff rose from the cacophony. And at the eye of the storm, Axl Rose, screaming about his switchblade tongue and gyrating in black fur and white cycling shorts like an angry penguin.

But halfway through the first chorus, the atmosphere changed in a fingersnap, Rose’s shrieked vocal dropping several octaves to an Indiana holler as he jabbed a finger at the crowd and snapped an order to security: “Wait, take that! Take that! Now! Get that guy and take that!”

What Rose would later claim to have seen was a biker from a local chapter called the Saddle Tramps taking photos on a contraband camera. It was supposedly the fourth such incident that night to go ignored by security (the band also claimed to have been pelted by bottles without reprisal).

“The security guys knew exactly what was happening and they were doing everything they could to let that guy go,” the singer recalled, “which fuelled my fire to make sure that didn’t happen.”

What happened next is the stuff of a thousand YouTube freeze-frames, as Rose swandived into the crowd (“I’ll take it, goddamit!”), resurfacing several seconds later, still swinging punches at fans, soundtracked by the rhythm section’s skeletal groove like a brawl in a Wild West saloon.

Clambering back onstage and killing the music with a conductor’s sweep of his arms, Rose barked a curt kiss-off – “Well, thanks to the lame-ass security, we’re going home!” – before throwing down the microphone and vanishing. As the band filed out after him, Slash offered a half-explanation, though hardly an apology: “He smashed the mic. We’re outta here.”

The night wasn’t over, though. Frustrated by the curtailed set – or perhaps revved-up by the febrile atmosphere – the Riverport crowd erupted into a full-scale riot. As fans pelted the stage with anything to hand – then-local journalist Daniel Durchholz recalls the venue’s plastic seats being torn from their moorings and skimmed into security guards’ faces – police officers arrived to form a protective barrier, attempting to quell a crowd now chanting “Fuck you, pigs!” and “Bullshit!”

It didn’t work. Soon, rioters were overtaking the stage, tearing down video screens and climbing gantries. “A fire hose was rolled out onstage, the idea being to blast anyone who dared try and break the cops’ perimeter,” wrote Durchholz on Billboard. “Unbeknownst to them, there was almost no water pressure.

One man jumped onstage and stepped into the ineffective stream, then pulled down his pants and waved his penis at the cops. We watched as revellers swung from cables underneath the 60-ton sound and light rig, which lurched sickeningly from side-to-side. A tech told us, ‘If that rig comes down, there will be massive death’.”

Other fans chose to loot the stage, making off with any equipment that hadn’t already been destroyed. One eyewitness recalled seeing an entrepreneur flogging GN’R piano keys in the parking lot for $5 a pop, while others tore up turf outside the venue, lit fires and had sex in public.

“The band just grabbed the vintage guitars they had and that was it,” recalled Guns fan and concert attendee Bryan Pollard in The Riverfront Times. “People were rolling out 4x12 cabinets and monitor mixing boards. That part was just hilarious. It was some sort of white-trash Fellini film.”

Less amusing was the personal fallout – 65 people injured, including 25 police officers – which set in motion an arrest warrant for Rose, albeit one that was delayed until he returned from the tour’s European leg, when he agreed to two years probation.

But scour the sleeve of that year’s Use Your Illusion albums and a short but sharp note made it clear the singer absolved himself of blame for the events in Missouri, and wouldn’t forgive the city in a hurry: “Fuck you, St. Louis!”