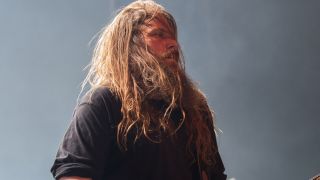 Lamb Of God guitarist Mark Morton has opened up on the real-life tragedy that inspired the lyrics behind the band’s track Embers.

He first wrote the song Walk With Me In Hell in 2006 to his then future wife, but says he had no idea that art would sadly imitate life just three years later when the couple were forced to endure the loss of their baby daughter Madalyn Grace Morton – a life-changing event that would eventually lead to the creation of Embers.

In an open essay to Noisey, Morton says: “Not too long ago, I sat playing guitar on a barstool in my kitchen and within about 15 minutes came up with the outline of the music that would become the song Embers.

“Knowing intuitively that this would be a special piece, I once again began scribbling lyrics to my wife. I described our shared pain and made references to places and events that only she would understand and recognise. I promised her that there was ‘still light to find our way.’ I hoped I was right.”

Morton adds that only six weeks after Madalyn’s death, he had to take the stage at New York’s Madison Square Garden – something he says he clearly wasn’t in a right frame of mind to do.

He continues: “I was by no means ready to re-enter that world, but the music industry is vicious and unforgiving – and somehow, there I was. For me, ‘grieving’ took the form of a rapid and immediate freefall into an abyss of drug addiction.

“While I don’t defend my response as appropriate – and I certainly wouldn’t recommend it – I do very clearly understand how it happened. And I do forgive myself.”

As for the finished track, the video of which can be watched below, Morton adds: “I didn’t write all of the lyrics.

“Randy Blythe wrote the words to the outro section that Chino Moreno sings so beautifully – those words and that performance are absolutely magical – but the verses and choruses that I did write reflect my experience living in the aftermath of a child’s death.

“For me, Embers is a song about hope. It’s about hanging on to that last shred of light in your life and not giving up on it. It’s about believing that love can overcome despair. Most of all, it’s about forgiving yourself.”

Lamb Of God have several dates remaining on their world tour in support of VII: Sturm Und Drang.

Lamb Of God’s Mark Morton will always play the blues