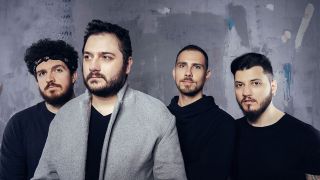 Romanian prog metallers White Walls have released a video for brand new single Starfish Crown. The song is taken from the band's upcoming album Grandeur, their third releasze, which will be out this Autumn.

“The writing process for this album was quite different," says singer Eugen Brudaru. "We came up with the whole thing during several writing camps and it was a BLAST. We`ve always inspired one another so being in the same room making music together was awesome. There were A LOT of Eureka moments! I think this is our most mature record so far.”

“Long time listeners of White Walls will notice that this album is somewhat more streamlined, if you will," adds bassist Șerban-Ionuț Georgescu. "Our approach this time around was to try and focus more on writing songs, trying to avoid the pitfalls of being a young prog band: hungry for jumping from riff to riff while disregarding structure, form and cohesiveness. We’re incredibly happy with what we were able to write and how it came to sound.”