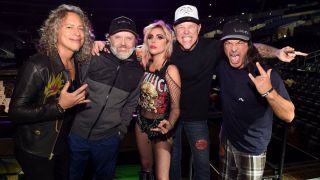 Metallica with Lady Gaga at this year's Grammys

A number of websites have accidentally run a story based on a metal website’s April Fool.

MetalDen.com ran a spoof story on April 1 suggesting that Lady Gaga would sing with Metallica in place of James Hetfield on a record titled The White Album – with a fake quote from guitarist Kirk Hammett saying: “Gaga is gonna kill ‘em all in the studio when she sings for us.”

Websites including The Metro and Unreality TV picked up the story and ran with it – despite the fact that the original piece also stated that Hetfield would play drums on the record – and that Lars Ulrich would step up from behind the kit and share vocal duties with the pop sensation.

It also said that Gaga has hired Meatloaf to be her vocal coach, with the words “Gotcha! April Fools!” printed at the bottom of the piece.

Metallica and Gaga took to the stage together at the Grammy Awards in February for a performance of Moth Into Flame. Ulrich later called her the “quintessential perfect fifth member of this band” and suggested a possible collaboration with Gaga could be a possibility at some point in the future.

Metallica will head out on the North American leg of their WorldWired tour next month.

Metallica and Lady Gaga: What Moth Into Flame should have sounded like