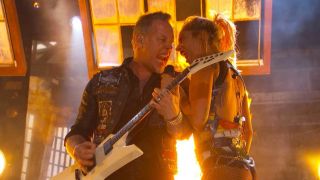 Metallica have released the dress rehearsal footage of their Grammy Awards show performance with Lady Gaga. The original broadcast was marred by glitches, including microphone trouble for frontman James Hetfield, who was forced to share a microphone with Gaga for the first part of their performance of Moth Into Flame after his own failed to work. Frustrated by the technical problems, Hetfield kicked over his mic stand and threw his guitar offstage at the end of the song. “I haven’t seen him like that in 20 years,” says drummer Lars Ulrich. “He was livid.” Ulrich later described Gaga as “the perfect fifth member of Metallica.”

The newly-released video shows the song as it should have been presented on the night, with both mics working and a frustration-free climax for Hetfield. “Ok, our little Grammy … hiccup … wasn’t that dramatic,” say the band. “But it still left all of us wondering, ‘What if?’ To answer that question and do justice to what we felt was an inspiring collaboration, we decided to share footage from earlier that day when all cylinders were firing just right.”

It wasn’t the only glitch on the night. As Megadeth picked up the Grammy for latest album Dystopia in the Best Metal Performance category, the house band played Metallica’s Master Of Puppets by mistake. Mainman Dave Mustaine saw the funny side, later tweeting “you can’t blame ‘em for not being able to play Megadeth.”