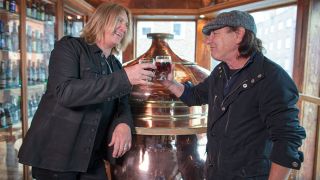 It will see the former AC/DC frontman interview a host of big names from the world of rock and metal, with the first episode featuring The Who’s Roger Daltrey scheduled to air on April 28.

Sky Arts say: “One of rock music’s iconic and tour-hardened frontmen, Brian Johnson, gives us a brand new and exclusive take on one aspect of the rock and roll life – live performance, touring and being on the road.”

Def Leppard frontman Elliott said: “Brian Johnson flew into Dublin to interview yours truly for a TV show that he’s doing called Brian Johnson’s Life On The Road and I was quite humbled to be invited to do it because the guests that he’s got on the show are quite extraordinary.

“We spent about eight hours shooting the show. We were walking around the Temple Bar area of Dublin in the rain and wind. It was cold and horrible but we did spend most of it indoors at The Porterhouse HQ where he sampled Joe Elliott’s Louder beer.

“To be quite honest I think he quite enjoyed it.”

Find the full episode schedule below.

Johnson was forced to bow out of AC/DC in March last year after doctors warned him he faced total hearing loss if he continued. The band hired Guns N’ Roses frontman Axl Rose to complete their Rock Or Bust world tour.

Johnson is the cover star of the latest issue of Classic Rock magazine, which is on sale now. Other artists featured include Royal Thunder, The Beatles, Danny Worsnop, Paul Stanley, Ice-T and more.

It's a long way to the top: What's next for Brian Johnson?