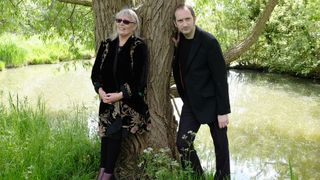 Original Fairport Convention singer Judy Dyble and songwriter and producer Andy Lewis have released a video for their new track He Said/I Said.

It’s taken from the pair’s upcoming album titled Summer Dancing which is due to arrive on August 18 via Acid Jazz and is said to draw on the duo’s “rural-urban upbringings and like-minded interests in history and culture.”

Speaking about the track, Dyble says: “The story of the song is how I was persuaded back into making music again after 30 years and the dangers and the delights of saying ‘yes’ to an idea and seeing what happens.

“And as you can see, the video shows how much we laugh when friends come to spend a day in the country.”

Lewis adds of the collaboration: “I’ve never felt so in tune with someone before. In a parallel universe, you could have ended up making records for Deram and been a sensational pop siren.”

Summer Dancing is now available for pre-order, while the cover art and tracklist can be seen below.