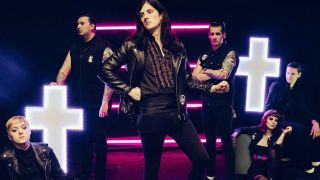 Creeper have launched a video for their new track Black Rain.

The song will feature on the band’s upcoming debut album Eternity, In Your Arms which will be released on March 24 via Roadrunner Records.

Frontman Will Gould says: “Black Rain is the third single from the album Eternity, In Your Arms and one of our favourites.

“A progression again from the singles released so far, this song shows the full range of the band on this album.

“It marks the first time Hannah Greenwood has sung a part alone on a Creeper track and also serves as the introduction to the record itself.”

Creeper will head out on the road from next month across Europe in support of the new album, with Gould previously promising fans an “immersive and theatrical stage show.”

He added: “These shows are a significant moment in the history of Creeper. Not only are they the first time you’ll hear the new songs from Eternity, In Your Arms live, but they are the biggest headline shows we’ve ever played.

“They will also be the first to have a full, ambitious production to equal the ambitious character of our debut record.”

Eternity, In Your Arms is available for pre-order through the band’s website.

The First Album I Ever Bought: Will Gould, Creeper