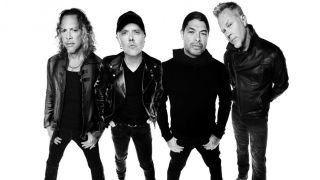 Metallica will celebrate the release of their album Hardwired… To Self Destruct with three events in London later this month.

The band will join Daniel P Carter on his Radio 1 Rock Show from 7pm on November 17. They’ll then head to HMV Oxford Street for a signing as the clock strikes midnight for Hardwired launch day.

All the lucky winners will be asked to make a £20 donation at the door to benefit The Railway Children, who assist children who live alone and at risk on the streets in the UK, India and East Africa.

The band recently released live footage of Battery and Ride The Lightning from their show in San Juan, Puerto Rico. Watch it below.

The promos follow the video they shared of fans in Columbia parading a giant replica of the band’s Doris mascot from their …And Justice for All album.

Vocalist James Hetfield this week revealed in an exclusive interview with Metal Hammer that he enjoys the ‘Hetfield memes’ online.