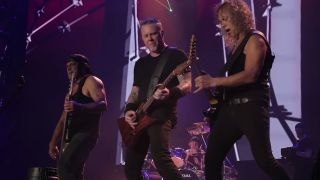 Metallica have released a live video showcasing their performance of classic track Master Of Puppets.

It was filmed at Singapore’s Indoor Stadium on January 22 – part of the band’s tour of the Far East in support of 2016 album Hardwired… To Self-Destruct.

In addition, James Hetfield, Kirk Hammett, Robert Trujillo and Lars Ulrich have released a five-minute recap promo of that night’s set, which can be watched below.

Last week, vocalist and guitarist Hetfield admitted that while he’d like to make changes to some of the band’s older albums, he would never do it because they were “snapshots of history.”

He said: “I find it a little frustrating when bands re-record classic albums with pretty much the same songs and have it replace the original. It erases that piece of history.

“These records are a product of a certain time in life – they’re snapshots of history and they’re part of our story.”

Metallica are now back on the road in South America and played Mexico City’s Foro Sol last night. They have two further dates at the venue this weekend ahead of an appearance at Lollapalooza Brazil on March 25. They’ll then head out on the North American leg of their WorldWired tour from May.