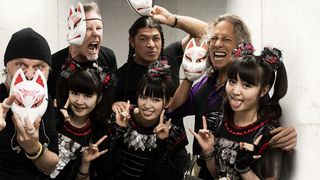 It’s Wednesday 11 January. The world has barely emerged from its New Year’s stupor, but Babymetal are about to grab 2017 by the horns and realise their dream. For tonight, in Seoul, South Korea, they are supporting Metallica. It’s the latest in a string of high-profile appearances for the girls. Last December, they opened for Red Hot Chili Peppers on their UK arena tour – a role soon to be reprised in the US. Later this month, they will support Guns N’ Roses in Japan. But playing with Metallica is the biggie. Not only does it represent full integration into the metal community, but it’ll see Su-metal, Yuimetal and Moametal – along with their founder and captain Kobametal – achieving their ultimate ambition.

“Metallica are like gods to us,” enthuses Su-metal, ever smiley and ready to rise to a challenge. “I had been admiring them for a long time and dreamed to perform with them, so I never thought it would come true this fast!”

Babymetal’s ascent, and their courtship of their heroes, has indeed been swift. They met in August 2013, at Japan’s Summer Sonic festival in Osaka. Babymetal were wearing ‘And Justice For Babymetal’ tribute t-shirts, which soon caught the band’s attention, and Lars ended up watching them play on the small Flower Stage. Later, the girls returned the favour by watching the headliners perform – and it was their first-ever metal show.

“I was so surprised!” exclaims Su-metal today, thinking back to the day that changed everything. “I was like, ‘What in the world is this?’ I found it interesting that instead of hearing their music through my ears, I felt everything with my heart. Until then, I thought metal was something so alien and scary, but that concert made me enjoy metal and want to know more about the genre.”

Band manager Kobametal, meanwhile, is a lifelong fan. For Babymetal’s ‘Legend 1997’ concert at Makuhari Messe in Chiba later that year, he even oversaw the creation of a large statue of a woman who loomed over the band and collapsed, like Metallica’s iconic Lady Justice one. It’s a level of fandom that has allowed Babymetal to connect with fans of heavy music more easily. He remembers seeing the band at the legendary, 50,000-capacity Tokyo Dome in 1991, after they released The Black Album. It affected him the same way as it did Su-metal, altering his life forever, and ultimately leading him down the path he’s treading today. “The album brought a new perspective to the metal scene,” he explains. “They had a profound influence, and their sound was just so natural that I instantly became addicted to their music.”

Twenty-six years later, and today marks the beginning of the Asian leg of Metallica’s WorldWired Tour, in support of new double album Hardwired… To Self- Destruct. In Gocheok-dong, south-west Seoul, under the winding Han River that bisects the city, the sweeping Gocheok Sky Dome looms like a large chrome cloud. The 17,000-capacity venue is only a year old, and is home to professional baseball team the Nexen Heroes. Outside, large posters hanging from poles announce Metallica’s presence. At merchandise tents, vendors are busy unpacking boxes and boxes of Babymetal t-shirts. There are four designs, each with the divine prayer of thanks ‘The Fox God Led Us To The Metal Master’ etched on the back. A badge displaying the logo cutely bears the motto: ‘Kawired… To Wallet-Destruct.’

It’s Metallica’s fifth show in Seoul, but it’s the first for Babymetal. South Korea has a K-Pop scene, but nothing like Japan’s idol subculture. Japanese rock bands such as Sekai no Owari and Radwimps are better known. A few in the crowd are diehard Babymetal fans who have brought along homemade pins and medals, but for most people it’ll be the first time they’ve heard anything like the band’s hybrid of poppy hooks and headbanging chaos. Backstage, Su, Moa and Yui, along with the Kami Band, are preparing to go on. Red-and-black outfits are pulled on, hair is sprayed perfectly into place and warm-ups are completed. Meanwhile, people pour into the Sky Dome in their thousands, quickly making their way across the bright-green floor towards the stage adorned with Babymetal’s banner. It truly is a vast space.

As showtime arrives, Babymetal and their entourage make their way through backstage corridors, walking past flight cases bearing Metallica’s distinctive logo. The band’s familiar, spoken-word intro tape blares out, detailing their creation by benign deity the Fox God, and then it’s onto the stage for the rousing, high-octane Babymetal Death, before the Kami Band come forward to show off their extreme metal soloing chops. They pay homage to their hosts tonight, with the classic duelling refrain of Master Of Puppets ringing out to surprised cheers and enraptured stares.

Next, the girls run through Catch Me If You Can in perfect formation. “I want to see a big circle!” exclaims Su-metal, tracing one in the air with her arm in an attempt to incite a pit, though some of the audience misunderstand and copy her gesture instead. Dance-powered Megitsune is as energetic as ever, Gimme Chocolate!! is received warmly, and Su gets everyone singing Karate’s honeyed ‘Whoa’s right back at her. By the time closer Road Of Resistance rolls around, there is a pit down the front, with bodies colliding to its impossibly frenzied riffs.

It’s a slick show that critic Jin Chung from the Korea Joongang Daily newspaper will later describe in glowing terms. “The group has been gaining a loyal following in recent years, and pulled off the impressive performance of dance and metal the group has come to be loved for, not missing a single beat,” he writes.

“I was sceptical at first due to my unfamiliarity with the whole Japanese idol trend,” he tells us afterwards. “But it was incredibly refreshing.”

Metallica fans, too, give it the kitsunes up. Sean Winemiller, a 22-year-old soldier from Illinois stationed in South Korea, owns Babymetal’s debut album but had never seen them play live before tonight. “I honestly think they were heavier than Metallica!” he raves. “But that probably has more to do with the tuning, because Metallica usually only play in E or Eb. Comparing their show to earlier footage I saw on YouTube of Babymetal first touring the world, I would say the girls have a lot more confidence playing outside Japan now.”

Varasorn Kitchamnong, 35, travelled from Bangkok to see The Four Horsemen, and had never seen Babymetal play either. “When I looked them up and heard their music, I thought they were really not my style,” he confesses. “Yet I wanted to see them if I had a chance, because the performance seemed really fun. Their show was very energetic, and like nothing I’d seen before! The best moment was when they played the song Karate. I think it played a major part converting me into being a fan. I couldn’t get it out of my head long after the show.”

An ever-professional Su-metal admits she felt the pressure of such a big event, but was pleased she managed to rule the stage and win over the crowd. “I was going onstage still feeling spacey,” she reveals. “As it was our first show here, we and the audience were kind of awkward figuring out how to pump up the show. But I was glad when I saw people jumping with the song Karate all the way to the back! I wanted to do what we usually do – be ourselves and show our style to the audience.”

Mission successfully completed, it’s time for Babymetal to watch Metallica rip through 18 songs, including the world premieres of newies Now That We’re Dead and Halo On Fire. But Su-metal is particularly excited to see them play her favourite song, Master Of Puppets, as they break out the riffs in front of large screens showing the album’s white crosses, with the audience singing back every note. “When I heard its big chorus, I thought it was amazing the way Metallica captivated the huge audience,” she says.

There’s also time for another meeting and another selfie tonight, with Lars, James, Kirk and Rob posing with the trio and holding those iconic Fox God masks up to their grinning faces. Su remains humble about meeting the legends again. “We got to chat about many things,” she says, “but I was really glad when they said to me, ‘Thanks for coming today.’”

Naoyuki ‘Ume’ Umezawa, founder of Japan’s Headbang magazine, has flown in for the show. He reckons the bands are a good match. “The fact that Metallica, who are at the top of heavy metal, appointed Babymetal to support their tour, speaks for itself,” he says. “Metallica try different approaches to metal. It might be a ‘no’ from a band like Iron Maiden, who play traditional, prestigious and orthodox British metal, but I think they’re accepted by Metallica because they think metal should experiment.”

Metallica have stayed relevant for more than 30 years, a feat Kobametal chalks up to their constant evolution of music, image, and something he can’t quite put his finger on. “I think it’s their attitude of persistently moving forward. I think it’s not just their sound, but because of the fact they are a band with a metal heart,” he affirms.

Now Babymetal will be looking to replicate the same success, building on the latest step of their incredible journey. Not only is Kobametal proud of their achievements, he believes they can help pave the way for the next generation, as a beacon of hope for what can happen if you work – and believe – hard enough.

“In my opinion, to be able to perform on the same stage as Metallica, who are one or two generations older than Babymetal, was such a significant moment, not only for Babymetal but also the future generations in the metal scene,” he says. “After seeing both bands perform, I felt that one of Babymetal’s duties is to carry the torch for the future of metal.”

For Su-metal, tonight is the perfect conclusion to a vision formed that day she saw Metallica play Summer Sonic festival, just over three years ago. She has thrown herself into a genre that once seemed strange to her, and in the process she’s become part of the fabric of the global heavy metal community. Even if you’re still a Babymetal cynic, you have to admit they’ve come a long way – you don’t see any haters sharing a stage with the biggest icons in our world.

“The best thing about becoming a part of metal culture is that we were able to open doors to new worlds which we never knew of before,” Su marvels. “I found out that there is a lot more out there that we could learn from, and after giving something new a try, that it could be fun! I think I’ve become stronger now.”

In the immortal words of James Hetfield, what don’t kill you make you more strong. When we venture to ask what the band’s goals are now, having smashed their target out of the stadium, we’re met with the standard ‘Only The Fox God Knows’ brush-off from Su and Koba. All we know is that he’s gonna have to come up with some seriously magical shit to top this.

BABYMETAL’S METAL RESISTANCE IS OUT NOW VIA EARMUSIC. METALLICA’S HARDWIRED… TO SELFDESTRUCT IS OUT VIA BLACKENED

Talking to Babymetal about their bonkers 2016

The track-by-track guide to Metallica – Hardwired... To Self-Destruct