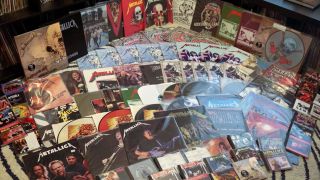 The Toronto native has been collecting since he was a young boy – and Metallica were so impressed, they interviewed him for their YouTube channel, saying they were “blown away” by the amount of items he’s acquired.

Brown says: “I started collecting at a very young age. My cousin got me a copy of the Black Album on cassette. I was interested in the music so much I wanted cassette singles and I started finding part-time jobs just so I could start buying more and more things.”

“One day I was in a shop in downtown Toronto and I picked up a vinyl copy of Ride The Lightning and it looked a little different to my CD copy – then all of a sudden I had two. Then I was like, ‘I should probably find a cassette of that.’ That was the point it started to spiral out of control.”

Brown says he has 850 vinyl and CD variations and up to 3000 pieces of Metallica memorabilia from across the world – but the hardest items to track down are items from the 80s.

Among his collection, he was rare test pressings, uncut clear Jump In The Fire picture discs and Cliff Burton autographs. But his most prized possession is the Black Album on cassette.

He adds: “It’s absolutely worthless and I bet it wouldn’t even play. But without that one cassette, I wouldn’t have gone down this journey.”

Metallica have also released a time-lapse video from their shows at Copenhagen’s Royal Arena, Denmark, from earlier this month. They were forced to reschedule one of the dates due to a throat problem affecting James Hetfield. It’ll now take place on September 2 at the venue.

Watch both videos below.

Metallica are currently gearing up for a run of South American dates in support of 10th album Hardwired… To Self-Destruct. They’ll then head out on the road across North America from May.