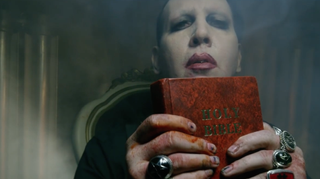 A still from the Say10 teaser clip

Marilyn Manson has released a brief teaser clip for a video for his new track Say10 – in which he seemingly beheads a figure representing Donald Trump.

The clip – which can be viewed below – is taken from the expected upcoming full promo for the title track from Manson’s 10th album, due for release on February 14 of next year.

In the video released as Americans vote for their next President, Marilyn Manson is seen standing over the body of a blond man in a blue suit and red tie – thought to represent the controversial Republican candidate Donald Trump.

Manson tells the Daily Beast: “As an artist my duty is to ask the questions. The viewer must answer them.

“Either way tomorrow goes, the visuals are meant to create contemplation. Because it’s obviously bigger than just tomorrow. It’s about the desperate acts of people who believe something that is preached by an unbeliever.

“Right now we’re in such a state of confusion when it comes to religion, politics, sexuality, and how they all tie together, and it’s being turned into a circus and a sideshow – and that’s something that I’ve been described as a ringleader of.

“It seems like a time for me as an artist, and as an American artist, to make something that causes a new set of questions to arise that aren’t simply statements.”

Manson has previously said he would not vote for Trump nor his rival, Democrat Hillary Clinton.