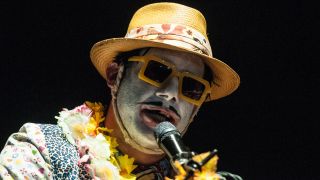 Borland took aim at supporters of the Republican Party’s nominee for this year’s US Presidential elections, saying: “Go fuck yourselves.”

Speaking after this week’s Republican National Convention got underway in Cleveland, Ohio, Borland says: “I don’t speak out about this kind of thing publicly much, but after this first night of the RNC, I can’t even sleep knowing that there are so many people out there with bones in the middle of their brains.

“I feel like I’m going to puke. I cannot believe this is happening. How can you guys support this dude and his stupid stupid wife?

An edit to his original post sees Borland saying he just wants Trump supporters out of his life. He adds: “I’m sticking with my ‘fuck you’.

“I don’t understand how a candidate like Trump has even gotten this far. I’m no one to be giving political advice, but neither is the dude from Duck Dynasty.”

Controversial businessman Trump has also attracted the ire of rock icons Queen today, after their classic hit We Are The Champions was used by his campaign team at the RNC.

Queen say they are frustrated that Trump has ignored previous requests not to use their music as part of his campaign.

Other artists have spoken out against Trump’s politics, with Red Hot the Peppers frontman Anthony Kiedis saying recently he was “a cartoon of a person.”

Last week, Alice Cooper offered voters an alternative to Trump when he announced he wanted to be the next American President.

The Many Faces Of Wes Borland

Who the hell are Queen Kwong?