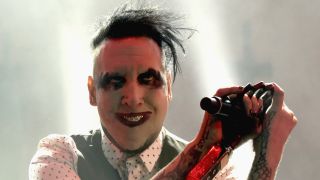 Marilyn Manson says he won’t vote in the upcoming US Presidential election because neither mainstream candidate has impressed him.

The shock rocker insists it’s not a cowardly act to choose not to vote in the battle between controversial Republican candidate Donald Trump and embattled Democrat Hilary Clinton.

Manson – who voted for Barack Obama in 2012 – tells Rolling Stone: “I don’t find either candidate to my liking, so I choose to stand out of this one.

Manson is the latest rock star to speak out on the upcoming election, with Slayer’s Kerry King having previously described Trump as “the biggest biggest liar I’ve ever seen in politics.”

Limp Bizkit guitarist Wes Borland also took aim at Trump, asking the Republican candidate’s supporters to stop following him on Twitter. Borland said: “How can you guys support this dude and his stupid stupid wife?

Kiedis said: “He’s a cartoon of a person. He says very unrealistic things about Muslims and race in general that make no sense at all.

“But sadly the real conundrum is that Hillary is not any better. She is just as much of a tyrant.”

Americans go to the polls on November 8 to elect the 45th President of the United States.

Manson’s new album Say10 will be released next year and he say sit has a violent edge to it. He plays at Knotfest in California this weekend, and will also appear at the Mexico and Japan versions of Slipknot’s festival.

Marilyn Manson: The Story Of Holy Wood (In The Shadow Of The Valley Of Death)