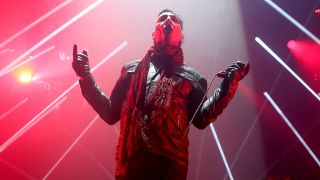 Marilyn Manson says the title of his upcoming 10th album Say10 comes from an idea he had when he attended a Christian school.

The shock rocker will release Say10 on February 14 next year and previously said it will sound “not very much in any way” like his previous effort, 2015’s The Pale Emperor.

Now he has revealed the origins of the title and says it “is very political, socially and sexually.”

Manson tells the Los Angeles Times: “My next album’s called Say10, like Satan. I found that title in my 12th-grade yearbook at Christian school. It goes back that far.

“The record is very political, socially and sexually. It deals with things I’ve talked about a lot but may not have sung enough. I work best when I combine imagery and words, rather than just words alone.”

He adds that the political element of the album does not relate directly to the upcoming US Presidential election, which is being contested by Republican Donald Trump and Democrat Hillary Clinton.

“This album, if it were blamed for any problems on life, I intentionally am asking for it because I think art needs to shake stuff up.

“That’s what I‘ve always thought. I just needed a little reminder, and that was this election.”

This week, Manson discussed his role on TV show Salem and revealed that during some downtime from filming, he had painted a goat black for his own amusement.