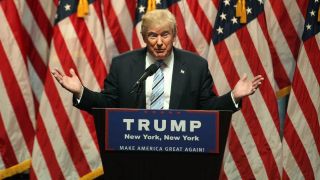 This week Republican presidental nominee Donald Trump once again used Queen’s We Are The Champions as his presidential campaign song, despite protestations from Brian May and Roger Taylor against the “unauthorised use” of their music. Applying the sentiment of the song to a political rally feels like it’s jumping the gun, as the electorate won’t get to determine who the champions are until November.

We decided to look at the troubled history of the rock’n’roll campaign song, and come up with some useful pointers for Trump’s future musical entrances.

The song: The most upbeat, feelgood song on cocaine-fuelled divorce album Rumours, Don’t Stop was Christine McVie’s concertedly optimistic take on a future without her husband, bassist John. It was a perfect partnership of pop group and politician, Hillary’s hubby using the song to propel himself to success in his first presidential campaign, incorporating the chorus into the climax of his speech, even reuniting the disparate bandmates to play his inaugural ball.

What it really said about them: By identifying himself with mid-70s coke-sodden soft-rock, Clinton cemented his reputation among baby boomers as both a regular guy and a dope-smoking rock’n’roll lawmaker.

The song: Apart from the air-punching chorus, BTO’s much-mocked drivetime classic made a strange choice for presidential candidate Al, husband of Tipper, the woman who preached against loose morals and occultism in rock in the 80s via her Parents Music Resource Centre. The lyrics concern a “devil woman” who performs filthier sex acts than you’ve ever seen, and includes the phrase “Any love is good love/So I took what I could get.”

What it really said about them: Al Gore’s a randy old goat?

Did it work? Not for Gore’s presidential chances, but he won the Nobel Peace Prize seven years later, so there was some truth in the song title.

The song: John Fogerty served in an Army Reserve Unit in the 60s, and wrote the song as an observation that the children of presidents Nixon and Eisenhower were unlikely to be sent to fight the Vietnam War. It made a pointed campaign tune for the Democrat (and Vietnam vet) Kerry’s presidential campaign against George W Bush, a president’s son who’d never seen military action but took the USA to war in the Middle East.

What it really said about them: A subtle, dignified comment on Dubya’s skewed moral compass, although perhaps Kerry’s message was a bit too coded to make full impact.

Did it work: Not really; perhaps Kerry’s message was a bit too coded to make full impact.

The song: The third single from 1991’s For Unlawful Carnal Knowledge LP, with its anthemic motivational surge and self-empowerment agenda, has proved to be catnip for Republicans over the years. When John McCain broke it out to introduce running mate Sarah Palin, band management released a statement that “Permission was not sought or granted, nor would it have been given” - although Sammy Hagar, a financial contributor to the 2004 Bush-Cheney campaign, wasn’t so sniffy.

What it really said about them: Vague pseudo-profundity with an air-punching chorus works wonders on a crowd.

Did it work: It worked for Bush, cementing his ‘good ol’ boy’ credentials, but not so much for McCain/Palin, and it didn’t do Van Halen any favours either.

The song: Eight years into his reign, who expected Tony Blair to make his conference speech entrance to this pogo-happy plea for cross-generational solidarity, a 1978 hit for the Hersham punk yobbos? Sham singer Jimmy Pursey commented “I hope Tony Blair wants to adopt those lyrics and live up to them.”

What it really said about them: Widely interpreted as a message directed at Blair’s chancellor (and nemesis) Gordon Brown, himself getting restless to take over the top job, it also suggested the PM still identified with disaffected youth on the street (although the youth on the streets of Iraq were probably even more disaffected as a result of Blair’s warmongering, right kids?).

Did it work: It staved off further Labour in-fighting and got Sham 69 playing live on Newsnight, so it kind of did.

The song: If you need a rallying song to pump up voters and establish yourself as the architect of their future - and your name is Angela - it’s a no-brainer, right? Yet the Stones’ mournful 1973 ballad doesn’t seem a natural fit for a German election campaign. One presumes lines like “I hate that sadness in your eyes… Ain’t it time we said goodbye?” were lost in translation.

What it really said about them: Her name is Angela. Do you see?

Did it work: Yes and no; Angie won the election, but the Stones commented “We are surprised that permission was not requested. If it had been, we would have said no.”

Boston - More Than A Feeling

What it really said about them: Huckabee clearly fancies himself as an AOR superstar; he plays bass in rock covers band Capitol Offence, who once supported REO Speedwagon.

Did it work? It probably worked better for the Democrats, given the sentiments of Stoltz’s letter and subsequent publicity.

The song: Unusually for a rock star whose song gets co-opted by a Republican presidential hopeful, the singer was delighted to lend support to the candidate, even appearing alongside the right-wing Mormon to sing the limp roots-rock jingle at a rally in their native Michigan.

What it really said about them: Romney was perceived as an out-of-touch fuddy-duddy. Who better to help him fabricate some hip, working class edge than the brawling, drug-guzzling rap-rock superstar ?

Did it work: Obama won Michigan with a 10% lead, and no one bought Romney’s bad-boy reinvention. It didn’t harm Kid Rock’s career though.

The song: A very odd choice of intro music for the then-Tory leader, at a policy launch event more used to the genteel strains of Elgar than brooding urban trip-hop covers of old reggae tunes. The line “This is not a place for me to stay” worked quite well as a metaphor for Hague’s brief leadership, but the choice was vociferously condemned by the left-leaning Bristol band.

What it really said about them: We presume Hague was keen to brand himself as the ’man next door’… but who thinks their nextdoor neighbour is prime minister material?

Did it work: God no.

The song: Queen, Aerosmith, Neil Young and REM all lined up to trash Trump for using their songs to promote his presidency, but Dee Snider was happy to sign over Twisted Sister’s 1984 tub-thumping anti-authority anthem of youthful rebellion. Because it seems, despite political differences, the pair are friends. “I have spent time with Donald and his family,” Dee told Canadian Business, adding that the billionaire tycoon was “a pretty chill guy”.

What it really said about them: Snider explained “It’s about rebellion, speaking your mind and fighting the system. If anybody’s doing that, [Trump] sure is.”

Did it work: Only time will tell…

And the campaign song that Trump should use is…

Uncle Ted’s the most outspoken and wholehearted Trump supporter in rock, so it’s only fair to cue up one of the Nuge’s early air-punching riff-rockers. Which better than this rabble-rousing glimpse of a potential Trump-led America? “Where’s the justice? Where’s the law? Raise your healthy voice!” Ted enthuses, also advising us to “Keep a gun in your hand”. Natch.