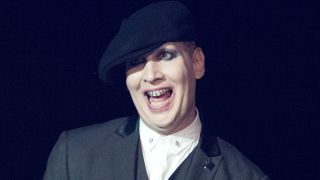 Marilyn Manson says upcoming album Say10 will come as a surprise to anyone who’s expecting it to follow on from 2015 release The Pale Emperor.

And he’s added that the work has a violent edge to it.

Manson revealed in July that his 10th record would arrive in February next year, although he declined to offer any more information.

Now he tells Rolling Stone: “It’s not very much in any way like The Pale Emperor. The people who have heard the new songs said it reminded them of Antichrist Superstar and Mechanical Animals – but with a new, different approach.”

He continues: “It’s pretty violent in its nature for some reason. It’s not emotional in the same way. It’s got a chip on its shoulder.

“I can’t wait for people to hear it – I think they’re going to be quite surprised.”

Say10 was once again co-written with composer Tyler Bates, and the pair are nearing completion of the project.

Manson adds that he was inspired by returning to Louisiana to shoot for the next season of Salem, which begins airing in November. “It did bring back memories of creating Antichrist Superstar, which, strangely enough, October is the 20th anniversary of,” he reflects.

“I found supernatural elements to be very authentic when I lived in New Orleans – the hoodoo, voodoo, all the Santeria, was very much a part of my surroundings when I was making music down there.

“Maybe that kickstarted my mojo into making a new album.”

Manson recently completed a North American tour with Slipknot and appears at their upcoming Knotfest events in San Manuel, California, on September 25, Toluca, Mexico, on October 15-16 and Tokyo, Japan on November 5.

The 10 most underrated Marilyn Manson songs