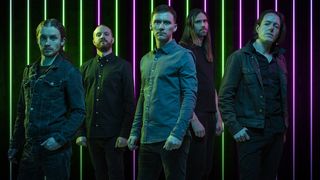 Tesseract have announced that their new studio album will launch later this year.

It’s titled Sonder and it’s set to arrive on April 20 via Kscope. And to mark the news, the band have released the first material from the follow-up to 2015’s Polaris – the single Luminary.

Vocalist Daniel Tompkins describes the record as “conceptually exploring a deep and devouring sense of insignificance, which ties into the overall theme and meaning behind Sonder. Also featured is an extended and re-worked version of last summer’s single Smile.”

Sonder will be released on CD, LP, clear vinyl, picture disc and via digital platforms, while a 2CD version will come with a binaural album bonus disc, which will provide a 360-listening experience specifically designed for headphones.

Bassist Amos Williams says: “The concept is to push past the restrictions of a stereo headphone mix and create an accurate 3D space in which positioning outside of the normal left/right axis can occur.

“This is something that every artist that uses in-ear monitors on stage wishes to recreate – the real and accurate positioning of instruments. We immediately felt that this technology could be applicable to us in the studio.

“Tesseract loves to bring what it does in the studio to the stage, but this time it’s experimenting with bringing a live element to the studio.”

The band have also announced a North American tour which will take place throughout April and May – and they’ll be joined on the road by Plini and Astronoid.

Williams adds: “North America is where Tesseract first took off and is always the leg of the album cycle that holds the most sentiment to me. There are a lot of good memories made and good friends discovered along those long and bumpy roads.

“It’s going to be a fun tour for us, especially as we’ve got a bunch of new tunes to add to the set!”

Find a full list of Tesseract’s 2018 tour dates below, along with the Sonder tracklist and cover art.

Sonder is now available for pre-order.

In the studio with Tesseract