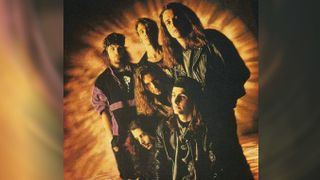 Temple Of The Dog

Temple Of The Dog have announced their first ever tour – to coincide with the 25th anniversary of their only album.

The grunge supergroup released their self-titled album in 1991 and a deluxe reissue is due out later this year, with unheard material to be included in the package.

Now they’ve confirmed a run of five US shows, taking in Philadelphia, New York, San Francisco, Los Angeles and Seattle in November. A video confirming the reunion can be viewed below.

The band say: “Temple Of The Dog has reunited and will tour for the first time ever since forming in 1990.

“A special ticket pre-sale for fans signed up to the Ten Club, Soundgarden, and Chris Cornell email lists begins immediately and runs through July 27.

“Tickets will go on sale to the general public at 12noon local time on Friday, July 29. $1.50 from each ticket sold will benefit the Chris and Vicky Cornell Foundation and an additional $1.50 will benefit Pearl Jam’s Vitalogy Foundation.”

Temple Of The Dog’s one-off album was designed as a tribute to their friend and collaborator, Mother Love Bone singer Andrew Wood, who’d died the previous year.