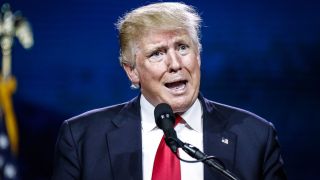 Queen say they are “frustrated” with US Presidential hopeful Donald Trump’s repeated use of their hit We Are The Champions.

The song played as the Republican party nominee took the stage at the Republican National Convention in Cleveland, Ohio. The British rock icons’ label Sony/ATV Music Publishing slammed the controversial politician’s “repeated unauthorised use” of their song and claim that his campaign ignored their cease and desist request.

They say: “Sony/ATV Music Publishing has never been asked by Mr Trump, the Trump campaign or the Trump Organisation for permission to use We Are The Champions by Queen. On behalf of the band, we are frustrated by the repeated unauthorised use of the song after a previous request to desist, which has obviously been ignored by Mr Trump and his campaign.

“Queen does not want its music associated with any mainstream or political debate in any country. Nor does Queen want We Are The Champions to be used as an endorsement of Mr Trump and the political views of the Republican Party. We trust, hope and expect that Mr Trump and his campaign will respect these wishes moving forward.”

Political candidates don’t need express permission from artists to use their songs on their campaign trail – as long as they obtain a blanket license under a performing rights organisation, such as ASCAP or BMI.

Last month, Queen guitarist Brian May slammed Trump’s use of We Are The Champions following his Republican primaries victory. He said: “I can confirm that permission to use the track was neither sought nor given. We are taking advice on what steps we can take to ensure this use does not continue.

“Regardless of our views on Mr Trump’s platform, it has always been against our policy to allow Queen music to be used as a political campaigning tool.”

Rolling Stones, Aerosmith, Neil Young and REM have also previously protested Trump’s use of their music at previous rallies.