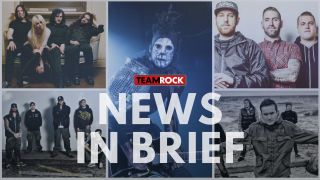 Here is TeamRock’s roundup of all the news snippets from around the world of rock and metal on July 20, 2016. Compiled by our news team at TeamRock HQ. For today’s regular, more in-depth news stories, click the ‘News’ tab in the menu above.

Blues outfit Thomas Wynn & The Believers have signed to Mascot Label Group ahead of the release of a new album.

The six-piece from Orlando, Florida, are working on the album with Grammy-winning producer Vance Powell, who has previously worked with the White Stripes, Elle King and Chris Stapleton.

The Ghost Inside have reunited on stage for the first time since last year’s fatal bus crash that claimed two lives.

The band were honoured with the award for Most Dedicated Fanbase at 2016 Alternative Press Music Awards, and they’ve released a video showing them at the ceremony in Ohio.

It can be viewed below.

The band’s tour bus was involved in a crash with another vehicle in El Paso, Texas, in November. Both drivers were killed and the band members suffered varying degrees of injuries.

Drummer Andrew Tkaczyk lost his leg and has since returned to playing the drums, having had a prosthetic leg fitted.

Terror have pulled out of their scheduled appearance at the This Is Hardcore festival in Philadelphia next month and also cancelled their August tour dates.

The Los Angeles hardcore heroes have had to step back from touring as frontman Scott Vogel is recovering from neck surgery.

The band had been performing without their singer after his surgery in July to repair “a three level posterior decompression,” but have opted not to go ahead with August’s schedule.

Vogel says: “Sorry for the let down.”

Heaven Shall Burn have confirmed details of their upcoming eighth album and made one of the tracks available to stream.

The German metal outfit will issue Wanderer on September 16 via Century Media Records. The track Downshifter can be streamed below.

Wanderer is available for pre-order now in a variety of formats.

The Pretty Reckless stream new track Take Me Down

The Pretty Reckless have made a new track called Take Me Down available to stream.

It’s taken from the group’s upcoming, as-yet-untitled, third album, due for release in the autumn.

Tyler Momsen and co have a number of festival dates lined up.

Borland took aim at supporters of the Republican party’s nominee for this year’s US Presidential elections, saying: “Go fuck yourselves.”

Posting after this week’s Republican National Convention in Cleveland, Ohio, Borland says: “I don’t speak out about this kind of thing publicly much but after this first night of the RNC, I can’t even sleep knowing that there are so many people out there with bones in the middle of their brains.

“I feel like I’m going to puke. I cannot believe this is happening. How can you guys support this dude and his stupid stupid wife?