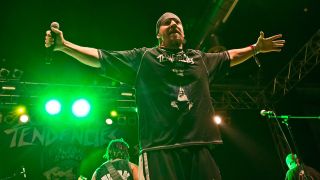 Suicidal Tendencies and Agnostic Front have announced a European tour which will take place in January 2017.

They’ll kick off the 12-date run at Berlin’s Astra Kulturhaus on January 18 and wrap up at London’s O2 Forum on January 29.

Lombardo said of the follow-up to 2013’s 13: “I think it’s very typical and very traditional Suicidal Tendencies. Our frontman Mike Muir has a very special style in which he writes his music and his lyrics and his structures. And I love it.

“It takes me back to how it all started, which was that punk attitude. I’m very happy to be a part of his organisation.”

Agnostic Front’s latest album is last year’s The American Dream Died. Vocalist Roger Miret previously told TeamRock that the group have “never been a studio band,” adding, “The hardest thing for us is the recording process. We’re more of a live band.”

Both bands have a number of remaining tour dates scheduled over the coming months.