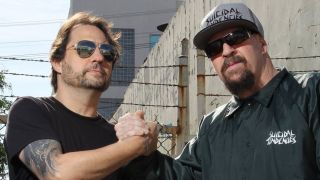 The follow-up to 2013’s 13 will feature former Slayer drummer Dave Lombardo and is expected to be released on September 30. Lombardo has been playing with the band since February.

Muir tells Clarin: “Dave has recorded with us, the album is called The World Gone Mad.”

Lombardo recently told Metal Wani: “I think it’s very typical and very traditional Suicidal Tendencies. Our frontman Mike Muir has a very special style in which he writes his music and his lyrics and his structures. And I love it.

“It takes me back to how it all started, which was that punk attitude. I’m very happy to be a part of his organisation.”

Suicidal Tendencies kicked off the South American leg of their tour later this week.