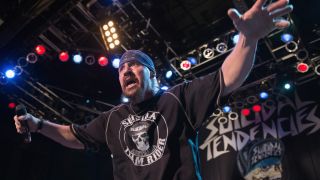 Earlier today we announced the crossover heroes Suicidal Tendencies as the latest band to be performing at the Metal Hammer Golden Gods. Naturally the entire Hammer office has been cranking Join The Army at full blast and wearing bandanas in celebration of one of the greatest bunch of skaters to ever form a band. But what makes us run around like idiots at the mere thought of an ST live show? Allow us to enlighten you…

To win tickets to the Metal Hammer Golden Gods and see Suicidal Tendencies perform live at the Indigo2, cast your votes HERE be entered into the ballot.

Originally formed in Venice, Los Angeles, in 1981, Suicidal Tendencies were one of the most distinctive and revered bands to emerge from the early years of hardcore. Their self-titled debut of 1983 is widely acknowledged as a stone cold classic, with songs like I Shot The Devil, Memories Of Tomorrow and Fascist Pig adding muscle and grit to the punk rock formula, not to mention a whole ton of badass Californian attitude and angst. 32 years later, it still fucking slays.

Still arguably the most famous of all Suicidal Tendencies tunes, Institutionalized was the centrepiece of that 1983 debut; a sustained, bug-eyed tirade by frontman Mike Muir about the enervating minutiae of teenage life and subsequent battles with parents and other authority figures. The original version cannot be topped, but it’s well worth checking out Body Count’s hilarious revamp of the song from last year’s Manslaughter album. Oh, and Fred Durst may have nicked a lyric or two from Institutionalized over the years too. Pepsi, anyone?

Mike Muir. What a guy. Suicidal Tendencies’ indestructible frontman has been leading the ST charge, sporting a bandana and bellowing like a man possessed for well over three decades. His voice is unique, his lyrical perspective reliably distinctive and astute and his open-minded approach to music, whether expressed through his main band or via any number of notable side-projects, is commendable in a subgenre that can often be a little myopic. Plus, Mike is a super nice guy. Which isn’t always the way, is it?

Many years before N.W.A. scared the living crap out of mainstream America by evoking the harsh realities of life on the streets of Compton, Suicidal Tendencies were making people very nervous by appearing – if only superficially – to be firmly affiliated to LA’s network of criminal street gangs. The band undoubtedly played up to this image, of course, and there seem little doubt that certain members had links to the gangster realm… but either way, Suicidal Tendencies looked tough, cool and ever so slightly menacing.

As with most subgenres, crossover thrash’s genesis is variously attributed to everyone from S.O.D. and D.R.I. to Corrosion Of Conformity, but Suicidal are plainly the band with the strongest claim to have effectively propagated this feral blend of thrash metal and hardcore punk. 1987’s Join The Army is another stone cold classic that bulged with ageless anthems like Possessed To Skate, War Inside My Head and Suicidal Maniac, which was memorably covered by Hatebreed on their 2009 album For The Lions. The second Suicidal album propelled them into the Billboard charts and secure their legendary status as crossover champions.

Not content with mastering punk rock and thrash metal, the Suicidal ethos of “anything goes” enabled them to be at the front of the queue when metal started dabbling in funkier waters. Alongside the genre-bending likes of Faith No More, Red Hot Chili Peppers and Living Colour, Mike Muir and co. chucked slap bass into the mix for 1990’s hugely successful Lights… Camera… Revolution! and delivered one of funk metal’s sharpest anthems in the shape of the evangelist-baiting Send Me Your Money in the process…

ROB IN THE HOOD

…and yes, the slap bass on the aforementioned album was performed by a certain Robert Trujillo. Rob joined Suicidal prior to the recording of their Controlled By Hatred/Feel Like Shit…Déjà Vu EP compilation in 1989, and his extraordinary four-string talents swiftly altered the band’s sound forever, adding extra textures and rhythmic flair that would not have been possible before. Around this time, Mike Muir formed another band, Infectious Grooves, to further explore his newfound love of the funk. Check out their debut album The Plague That Makes Your Booty Move…, if only for the superb Therapy, featuring Ozzy Osbourne as guest vocalist. Yup.

Mike Muir has a way with words. He’s particularly brilliant at swearing and making each foul-mouthed syllable count, most notably on 1994’s hugely underrated Suicidal For Life, wherein Mike’s swear box ended up overflowing after the likes of Don’t Give A Fuck, No Fuck’n Problem, Suicyco Mothafucka, Fucked Up Just Right and No Bullshit enabled him to get a few things off his chest. Fucking awesome.

They may be unsung heroes of metal to some degree, but Suicidal Tendencies have had a massive influence on generations of bands. Everyone from Rage Against The Machine, Korn and Limp Bizkit through to Slipknot, Soulfly and Skindred have cited Muir’s crossover crew as a major inspiration. When it comes to mixing seemingly incompatible genres together, Suicidal may well be one of the most important and groundbreaking bands our world has ever witnessed.

STILL KILLER AFTER ALL THESE YEARS

Suicidal Tendencies built their reputation on intense and chaotic live shows, and it is that dedication to entertaining people while causing as much mayhem as possible that has enabled the band to remain such a huge draw on the live circuit. If you saw them, for instance, at Hammerfest in 2010, you’ll know that they are still a phenomenal live band and that Mike Muir, in particular, still exhibits the energy and commitment of a wide-eyed teenager. There are few better bands to mosh or stagedive to. Fact.

If you want to see Suicidal Tendencies live at the Metal Hammer Golden Gods, cast your vote in the awards HERE to be entered into the free ticket ballot.