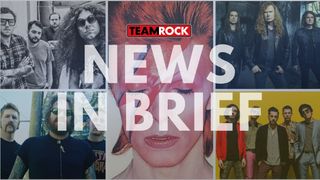 Here is TeamRock’s roundup of all the news snippets from around the world of rock and metal on July 14, 2016. Compiled by our news team at TeamRock HQ. For today’s regular, more in-depth news stories, click the ‘News’ tab in the menu above.

Lordi will release their eighth album Monstereophonic (Theaterror Vs. Demonarchy) on September 30 via AFM Records.

The follow-up to 2014’s Scare Force One was produced by Nino Laurenne who previously worked on the band’s 2008 effort record Deadache. Laurenne has also worked with Children Of Bodom, Amorphis, Apocalyptica and Stratovarius.

The album artwork and tracklist can be viewed below.

Lordi say: “Get your asses ready for some serious kicking, as Monstereophonic will be released September 16. One last chance to see the prettiest band on the planet in their SF1 outfits will be at Sabaton Open Air in Sweden next month. After that, get used to this look.”

David Bowie’s Blackstar is the best-selling vinyl release of 2016 so far, according to figures published by The Vinyl Factory.

Blackstar was released on Bowie’s 69th birthday, just two days before his death. It has sold 57,000 vinyl copies this year so far, with the nearest rival being Adele’s 25 with 36,000 sales.

Blurryface by Twenty One Pilots is third in the list. The Musicians’ Union has welcomed the news, saying it indicates young people are buying more physical products.

Megadeth have released a short teaser clip for an upcoming music video for Post American World.

The track is taken from the band’s latest album Dystopia and the full video will be released in due course.

Frontman Dave Mustaine says: “People don’t want America everywhere. And we can be like, ‘Okay, screw it. We’ll pull out.’ And then they can see what happens.”

Coheed And Cambria and Underoath are among the acts confirmed for Chain Fest in California.

The event takes place at The Observatory Grounds in Orange County on September 17 and was set up to celebrate the 20th anniversary of the Chain Reaction venue.

Mastodon are the latest band to be featured in an exhibit at the Hard Rock Hotel in Las Vegas.

It features a mix of stage clothes, musical instruments and artwork and it will be on display through to the summer of 2018.

Mastodon say: “Joining the ranks of some of the biggest and most influential names in rock’n’roll, we are honoured to now be a part of rock and roll history at the Hard Rock Cafe, in Las Vegas.

“Mastodon’s showcase features artefacts from the past, including guitars, drums, set lists, handwritten lyrics, and clothes all used by the band on the long road to the present form over the past 16 years we have been together performing.”

Crown The Empire stream Weight Of The World

Crown The Empire have made their track Weight Of The World available to stream.

It’s taken from their upcoming third album Retrograde, due for release on July 22 via Rise Records.

Singer Andy Leo says: “Weight Of The World is about living under the unblinking eyes and scrutiny of social media, whether you are in a band, a public figure or just a kid trying to belong.

“It’s about feeling the pressure of trying to please everyone all the time, but only to not please anyone at all.”