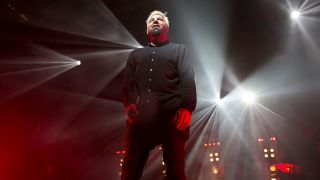 Deftones’ Chino Moreno has shed light on the moments of reflection he has while on tour.

The vocalist admits to “bugging out” while thinking back on his 23-year career as a singer.

Speaking about his shows to Fact Magazine, he says: “After the first song-and-a-half, if everything is working out, there’s this overwhelming joy and feeling, like ‘I can’t be messed with now.’ Even if something does go wrong, I’m on a forward trajectory.”

Moreno adds: “There’s tons of times up there on stage or before or after the show, that I just sit there after I get out of the shower in my towel just bugging out on the experience that we just had. I look back and think, ‘Wow, we’ve been doing this for 20 something years.’ That’s well over half of my life that I’ve been entertaining people with my voice.”

The singer recently explained their setlist choices and said the band find comfort in their slow rehearsal process.

Deftones will resume touring at the end of the month to promote their eighth studio album Gore.