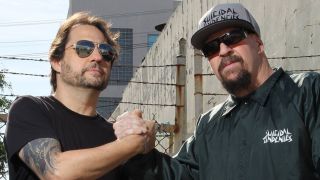 Suicidal Tendencies will release their next album on September 30.

The as-yet-untitled follow-up to 2013’s 13 will be the first to feature former Slayer sticksman Dave Lombardo, who has been playing with the band since February.

The band shared a clip of the sticksman tracking drums in the studio last month.

Lombardo recently told Metal Wani: “I think it’s very typical and very traditional Suicidal Tendencies. Our frontman Mike Muir has a very special style in which he writes his music and his lyrics and his structures. And I love it.

“It takes me back to how it all started, which was that punk attitude. I’m very happy to be a part of his organisation.

“I feel very welcomed. I feel very much appreciated, and there’s a lot of respect amongst the musicians, and camaraderie. We have a really good time together. We hang out as a band, which is important – I feel it’s very important.”

Meanwhile, there has still been no official word from the band on the status of their regular drummer, Eric Moore – but he has been working with Suicidal Tendencies ex Nico Santora on a new project called Lillake since the guitarist announced his departure last month. His statement can be viewed below.

Suicidal Tendencies will kick off the South American leg of their tour later this month.