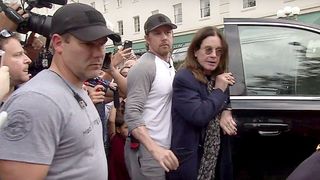 Ozzy Osbourne’s fear of being attacked by a crowd reached a peak when he made a public apology last November for desecrating the Alamo Cenotaph in 1982, his son Jack has revealed.

The Black Sabbath frontman was banned from performing in San Antonio 34 years ago after he urinated on the war memorial while wearing a dress during a drunken episode. His action was viewed as desecration and the ban remained in place for 10 years, until he donated $10,000 to the Alamo memorial fund.

Jack Osbourne tells EW.com: “We had to chop a bunch of things down in the edit, because it was really quite charged. There were a lot of people there.

“The city of San Antonio was great with allowing us access – but they totally threw us under the bus, announcing at a council meeting that we were coming.

“We remained relatively under the radar doing this show. Going to San Antonio and having that happen was just like, ‘Oh, man.’”

He adds: “My dad is great with crowds. He’s great with all that when it’s in his setting. But in the 80s there was a lot of aggression towards what he does.

“He always worries – is there that one lunatic in the crowd? So that made him really uneasy.”

Ozzy recalled the 1982 incident on TV in December, saying: “It’s 7.30 in the morning, I’ve got half a bottle of Courvoisier and this green evening dress, and I thought, ‘I need to take a pee – there’s an old wall.’ It was the Alamo.”

The first episode of Ozzy And Jack’s World Detour premieres on History on July 24. Black Sabbath’s farewell tour continues until February next year.

Sharon Osbourne: Can I trust Ozzy?