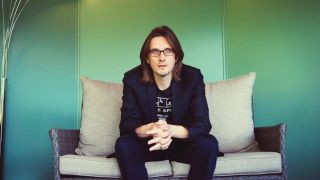 The label is part of the Universal Music Group, with Wilson joining a lineup that includes Peter Gabriel, Van Morrison, Thurston Moore and Iggy Pop.

Wilson says: “I’m absolutely delighted to be entering into partnership with Michael Roe and his team at Caroline for my next album. Although Caroline exist within the Universal Music Group, their philosophy allows me to remain creatively independent, while at the same time providing the ‘muscle’ that being with a major organisation brings.

“This makes it a perfect home for me, and I’m happy to now be label mates with some of the most respected musicians in the industry.”

Joint managing director of Caroline International Michael Roe adds: “I’ve been a fan of Steven’s recorded and production work for many years. He’s an incredible talent with a big and dedicated fanbase but someone who has not received the wider recognition I think he deserves. I’m thrilled he’s chosen Caroline as a home.”

Wilson’s last full-length solo studio album was 2015’s Hand. Cannot. Erase. and he released “interim” album 4½ in January last year. He also worked with Aviv Geffen on Blackfield V which was released in February this year.

Wilson’s next record is expected later this year.