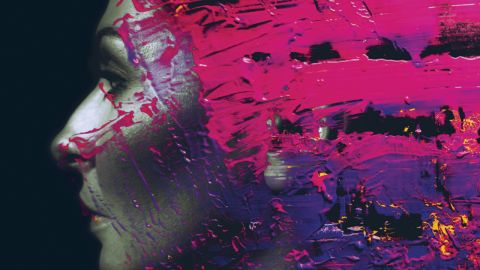 As the old adage has it, truth is sometimes stranger than fiction.

Not least with the latest starting point for Steven Wilson’s fourth album. Forget the ever lengthening shadows, the haunted houses and the ghost and ghouls that made up 2013’s The Raven That Refused To Sing (And Other Stories) – the spectres that form Hand. Cannot. Erase. are very real indeed, like a bad dream from which you can’t wake up as you realise that you’ve been conscious all along.

Wilson’s no stranger to the dark stuff, he has an eye for the melancholic and a taste of the macabre, but no one can be surprised by the impact that the story of Joyce Carol Vincent (as realised in the Carol Morley’s acclaimed documentary Dreams Of A Life) had on the songwriter when he first stumbled upon it in 2011.

He was, he says, “completely spellbound” by the film. The complex story of the circumstances making up Vincent’s death is truly the stuff of nightmares. A high-flyer who suffered at the hands of an abusive partner, she went on to become a recluse living in a bedsit in north London, estranged from her family and friends. She died there and then, through a series of extraordinary and tragic circumstances, wasn’t discovered until almost three years later, in January 2006. She was found, almost skeletal, in the flickering light of her still-functioning TV, next to some partially wrapped presents she’d been preparing for Christmas.

“This planted the seed,” says Wilson, “and the rest of the concept ballooned from there. The story seemed so symptomatic of the modern world, the idea that – even in this age of social media – you could be surrounded by millions of people on the other side of walls and yet still be completely isolated. I used Joyce Vincent as a starting point, a vessel to explore all these subjects, and invented a fictional character.”

As a jumping-off point it’s precariously high, and it would be understandable if Wilson had chosen instead to continue telling horror stories in the dark, but for a man whose head was irrevocably turned at the age of eight by both Pink Floyd’s The Dark Side Of The Moon and Donna Summer’s Love To Love You Baby, each with their own intractable arc, standing still creatively was never going to be enough.

Hand. Cannot. Erase. is as expansive as Wilson might have ever been and more concise than he’s ever been before. Case in point, the almost fleeting title track – a relatively scant four minutes plus – which, with its lyrical phrasing and staccato melody could have easily featured (as strange as it may sound), on the Manic Street Preachers’ This Is My Truth Tell Me Yours album. It’s a hitherto unseen side to Wilson’s musical personality and a welcome one too.

Purists shouldn’t fret though, Wilson is as singularly uninhibited as he’s ever been on Hand. Cannot. Erase. He utilises Israeli singer Ninet Tayeb to thrilling effect on the undulating and sprawling Routine – in typical Wilson fashion, he tried the same song with four different singers before settling on her vocal. Elsewhere, there’s a choir and, perhaps most chillingly, a remote female voice who occasionally carries the storyline along in near colourless monologues set against spiralling washes of music that are as much looping, ambient dance as they are anything to do with progressive rock.

That said, Wilson and his band (Marco Minnemann, Guthrie Govan, Nick Beggs and Adam Holzman) lean heavily on Rush’s Jacob’s Ladder and The Camera Eye, not least in the co-joined opener First Regret/3 Years Older. There are also flourishes of 70s rock in the hard driven Ancestral, as fiercely overblown in parts as the lamenting Perfect Life is an exercise in defeated understatement, though both have an elegant charm all their own.

Happy Returns is the chilling denouement, sounding like one final phone call to the outside world before the shades are forever pulled down tight. Its high keening tone is the last refrain as night falls forever and the door is closed on a life ended in futility, lost and utterly alone, doomed to be shrouded by darkness for the next three years, Wilson’s wonderful elegiac soundtrack its fitting swansong.