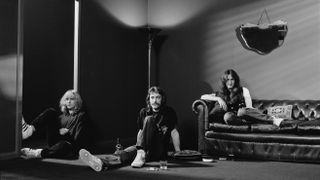 “I got into Rush because Tommy Vance used to do a rundown every Christmas of top tracks on the Friday Rock Show on BBC Radio 1.

Every year it was the same thing – Stairway To Heaven was always number one, Supper’s Ready was always number two. I was just discovering rock music at the time and the Christmas rundown always featured two tracks by Rush – 2112 and Xanadu – and I loved them both, and totally fell in love with the band as a result.

My parents bought me A Farewell To Kings, and I subsequently worked my way backwards and forwards through the catalogue until I got to Hemispheres.

Cygnus X-1 Book 1: The Voyage was always my favourite track on A Farewell To Kings, so I was intrigued to see how this music would be carried on on Hemispheres. If you look at their catalogue as a whole, Hemispheres really is the zenith of Rush as a stereotypical prog rock band.

But it was released in 1978 [at the height of punk], so you’d think that would be the worst possible time to be releasing your ultimate prog rock statement. But Rush did cross over into hard rock and metal as well, and of course they completely reinvented themselves after Hemispheres. Within two years they had recorded Moving Pictures!

The first side is a difficult piece of music, to be honest with you – especially if you were so enamoured with Cygnus X-1 from A Farewell To Kings. There’s not a lot in it – the first ten or twelve minutes is just two or three riffs circling around each other.

And yet side two is so flawlessly perfect that you tend to forget side one; it overshadows side one. But I go back to it and enjoy it, and see it as a totally essential part of Rush’s career trajectory.

The closing track La Villa Strangiato is perfect, I think. I’ve never known how to pronounce it, but it’s the height of Rush as a technical rock band, and Alex Lifeson’s solo has to be one of my top five guitar solos ever.

And yet it never seems like they’re showing off. The music always seems to be the main thing for them, rather than the technique.

I was never a big fan of the Roger Dean kind of fantasy artwork, and I suppose at the time even the great gate-fold sleeve with all the lyrics must have seemed a bit like a throwback. But at the end of the day, it is what it is: a naked bloke stood on a brain!”