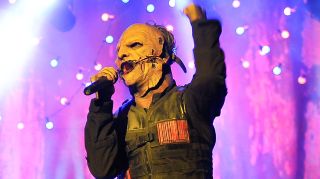 He’s responded to speculation after bandmate Shawn ‘Clown’ Crahan revealed that he and Jim Root were planning to start writing for the follow-up to .5: The Gray Chapter in February.

Last year Clown suggested that the band’s sixth full-length release might arrive in 2017.

Asked about whether the latest development means an album is coming soon, Taylor tweets: “Not really. That just means they’re gonna start writing music. We won’t go in the studio for two years.”

He’s planning to focus on Stone Sour in the coming months as they work on what will be their sixth release. He recently said: “We have 18 songs demoed. It’s the best material we’ve ever written. This album, is going to eat people – it’s so good. It’s gonna destroy people.”

Last year Taylor discussed the possibility of a Slipknot concept album, saying: “It’s an interesting idea. They told me to start thinking about an idea for a story. We’ll see what happens.”

Before that, Clown reported: “I’ve been on to Jim Root, like, ‘Man, we’ve gotta write an art record, our Wall, our Sgt Pepper’s.

“I’d love it if we could do a double album with interludes. Have a concept, maybe make a movie. Things that have all been done before – but our way, our interpretation. That would be a grand slam for the Clown.”

Corey Taylor: I want to say sorry to Rick Rubin