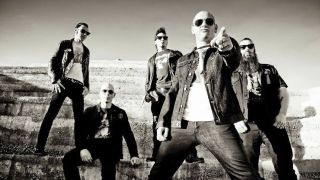 Stone Sour have 18 songs ready to record for their sixth album.

Frontman Corey Taylor says the follow-up to 2013’s House Of Gold & Bones – Part 2 will “destroy people” and that it’s the best material the band have ever written.

Taylor tells WRIF (via Blabbermouth): “We have 18 songs demoed. It’s the best material we’ve ever written. This album, the next Stone Sour one, is going to eat people – it’s so good.

Asked whether the album will be packaged as elaborately as the two House Of Gold & Bones albums – which formed a house when put together – Taylor adds: “We’re just going back to basics. I’m an old-school guy. I think most of us are. The thing that I loved about those great albums is that you would get it and you would wanna study everything.

“So I’m gonna try to meld that world with the electronic world and see if those two can kind of coalesce and coexist. We’re getting art together already. We’re starting to really get stuff together – like, really see the vision of it – and just put together just a kick-ass rock and roll album.”

Taylor also discusses his recent spinal surgery to repair his broken neck, saying he has good days and bad days.

“My symptoms kind of come and go, but you just deal with it,” he says. “I’m glad I had the surgery, and I’m getting through it. It’s not hampering my show. If anything, it’s really making me take a look at what I kind of took for granted, and just enjoying the shows for what they are.”