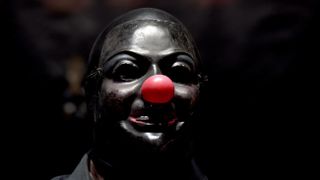 The band have only recently wrapped up touring in support of 2014 album .5: The Gray Chapter – which arrived six years after fourth album All Hope Is Gone.

But Crahan is hinting that fans won’t have to wait as long for the sixth album.

He tells Rolling Stone he plans to meet up with Slipknot guitarist Jim Root in February 2017 to start writing new music “because we want to write.”

Crahan also says he wants to make another film after the success of his directorial debut Officer Downe, which is based on a comic book and stars Sons Of Anarchy actor Kim Coates. He says: “I was born to make movies.

“I’m into fashion, death, sex and clothes. I work really hard to portray things that you’re not going to see at Walmart.

“I picked everything that you see. The colour, the outfits, everything. It was inspired by the comic but hand-done by ourselves.

Slipknot frontman Corey Taylor joked this week that hiring 26-year-old Jay Weinberg as the band’s new drummer was a bad idea because he struggles to keep up with his pace.